If your calendar hasn’t permitted a visit to either Chiang Mai’s Saturday or Sunday street markets never fear: Chiang Rai also has a couple of good walking street markets.

In content they are very similar: clothing, hill-tribe chic, the ubiquitous carved soap and candles, plenty of food and drink stalls and general bric-a-brac. Even if you have taken in the big city ones, provincial Chiang Rai’s versions are less hectic and crowded, with a more relaxed atmosphere and well worth taking in as well.

If the Night Bazaar looks a bit quiet on a Saturday evening it’s because all the locals have headed down to Thanalai Road for a bit of browsing and grazing. The walking street affair sets up along some 500 metres of Thanalai which is just one block north if you’re walking up from the clock tower or the restaurants and night bazaar of Phaholyothin. It opens up a bit earlier than its daily competitor—from 17:00 onwards—and while there is a lot of overlap in terms of goods on show there is definitely a bit more variety in the Saturday one.

Lacking the fixed eating areas of the Night Bazaar there’s a consequential proliferation of food, snack and drinks stalls offering a varied takeaway selection to nibble on as you stroll. Chiang Mai’s Ratchadamnoen has adjacent temple yards with seating areas and food vendors, which Thanalai lacks, but being far less crowded you can browse and snack on route here, which you’d have a job doing at the former without risking a sate stick up your nose.

There are of course the obligatory fried insects but also sate, kebabs, grilled chicken, dim-sum, miang kham (tea leave packets stuffed with desiccated coconut, peanuts and ginger) and plenty of juices and smoothies from locally grown fresh fruits. There are also plenty of takeaway curries and other dishes you can take back and eat in Mercy Hostel’s guest kitchen, for example.

A second walking street sets up every Sunday evening on Sang Khon Noi, (also known as Happy Street and that’s got nothing to do with massages), which isn’t so central and a bit smaller than the Thanalai one, but is even more relaxed and friendly. Items on display are very similar but the wider, more tree-lined road has more sit-down eating spots. Starting time is similar, though the more suburban Sang Khon Noi market closes down a bit earlier—usually around 23:00. It’s only a 10-minute walk from Jetyod Road or a 60-baht tuk-tuk ride from Jetyod.

Saturday Walking Street
Thanalai Rd, from the junction of Tri Rat to Sri Kerd Road, (one block south of the clock tower). 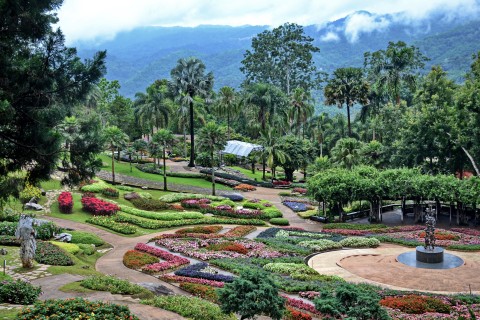