If you’re tired of the ruins, here’s your dose of nature.

Not to be confused with a mountain range of the same name in Southern Thailand’s Nakhon Si Thammarat, Sukhothai’s Khao Luang is a relatively small patch of forested mountains. Most travellers notice them only as a backdrop for sunsets viewed from the historical park. In the Sukhothai period the mountains were seen as the sacred home of Phra Kaphung Phi, a deity with the power to determine the success or failure of the kingdom.

Accessed by a four-kilometre trail that begins at park headquarters on the east side of the mountains, a string of four viewpoints are found on a ridge that reaches up to 1,200 metres. Along the way you’ll pass giant dipterocarp trees, bamboo groves and caves filled with bats. It takes around four hours to reach the top and some fairly steep sections should be expected. The rangers do not allow hikers to begin the climb after 13:30.

Accessible via the same trail, a campsite is located near the Khao Narai peak and visitors can bring their own tent for 30 baht or rent one from the park for 250 baht. From here you can see the sunrise and the twinkling lights of Sukhothai and Phitsanulok, if it’s clear enough, after dark. Another viewpoint found within a kilometre of the campsite is a good place to watch the sunset.

A few multi-bedroom bungalows starting at 1,200 baht per night are found alongside a restaurant and visitor centre at park headquarters, located 20 kilometres south of Old Sukhothai. From here you can take a kilometre-long hike to the small Hin Rang Waterfall.

Located on the west side of the Khao Luang range and reachable after a 50-kilometre ride from Old Sukhothai, Sai Rung Waterfall flows over four tiers with several pools to cool off in during and just after the rainy season. On sunny days, a rainbow forms over part of the falls from around 11:00 to 16:00. Though it’s also part of the national park, Sai Rung is essentially a separate destination.

Note that we have not yet made it inside Ramkamhaeng National Park: the above info came from local TAT officials and a helpful account by the Tar Heel Voyager.

To reach park headquarters and the trail to the campground and viewpoints, head south down Highway 1272 from Old Sukhothai (the turn is signposted off Jarod Vithithong Road to the east of the historical park) and look for signs pointing right (west) after around 15 kilometres.

To reach Sai Rung Waterfall, head west out of Old Sukhothai, passing the gates to the historical park’s western zone, and bear left on Highway 12. After around 10 kilometres, take another left on Highway 3019 and look for a sign pointing left (east) after around 30 kilometres. Alternately you could take Highway 101 south from New Sukhothai, or Highway 1272 from Old Sukhothai, and turn right (west) on 3019. Expect to pay around 2,000 baht for a half-day trip to Sai Rung Waterfall if arranging a car and driver through a Sukhothai guesthouse.

Our top 10 other sights and activities in and around Sukhothai

A splendid set of ruins

Sukhothai in a day

Get an early start

Check out the tapered fingers

A good collection of info and artifacts 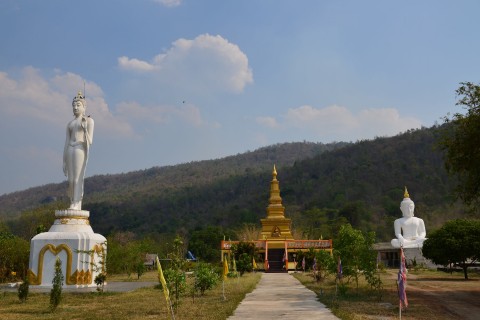 If you’re up for something different