Wat Thai Wattanaram is an unusual Mayahana Buddhist temple built in the 1850s by members of the Thai Yai ethnic group from Burma -- hence it’s alternate name. A bunch of quirky features join several stunning Buddha images to make this large Burmese-style temple worth the side trip.

You’re first met by shiny lion guardian statues that appear to have been crafted from many pieces of brass, followed by a miniature (but still quite large) replica of Shwedagon Pagoda and a graceful Shan-style chedi. Also check out the red-eyed chicken riding another chicken in front of an eye-catching building enwrapped in golden vine designs.

Inside the building topped by the Shwedagon replica sits a large marble Buddha that resembles the revered Buddha image of Wat Don Kaeo up in Mae Ramat. A neighbouring wihaan houses an exquisite bronze replica of Mahamuni, an extremely sacred Buddha image housed in Mandalay that features an ornate crown and regalia.

Next-door sits an airy hall with high ceilings and multiple white Buddha images striking various postures, topped by smaller ancient Buddha images placed in the niches. Check out the psychedelic reflections of the Buddha’s faces in the swirling mirror-like decoration that covers the walls.

Stretched out almost as an afterthought in the far back corner of the complex is a roughly 60-metre-long Burmese-style reclining Buddha.

The highlight for us was another large room centred around a bizarre display of Buddha and friends whizzing towards a huge three-dimensional map of Southern Asia, complete with a Buddha and guardian circling the perimeter on a motorised track. The whole spectacle felt like a Buddhist version of the “It’s a Small World After All” ride at Disney World.

We arrived to find a saffron-robed monk trying to toss coins into a pair of spinning bowls, like a game out of a county fair. You’ll also find dozens of vivid Thai Yai-style murals adorning the inner walls.

Overall we felt that Wat Thai Yai was well worth the effort to reach: If you can only make it to one temple in the area, this should be it. With more time you could stop here on the way to the balancing cliff-side chedi of Wat Phra That Hin Kio, which overlooks Burma and the Moei River valley some 15 kilometres north of the Asia Highway.

Wat Thai Wattanaram is located just off the north side of Asia Highway, about two kilometres east of the border. Head north at a traffic light on Mit Maitree Rd and then take an immediate right through the temple gate and the entrance will be on the left. If this gate is locked, keep north on Mit Maitree and look for a second gate on the right, just beyond a small cluster of food vendors. 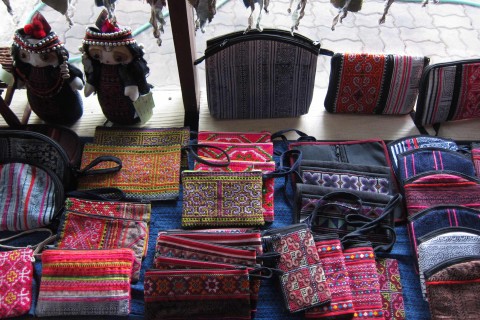 Shops and markets in Mae Sot

Don’t leave without a souvenir 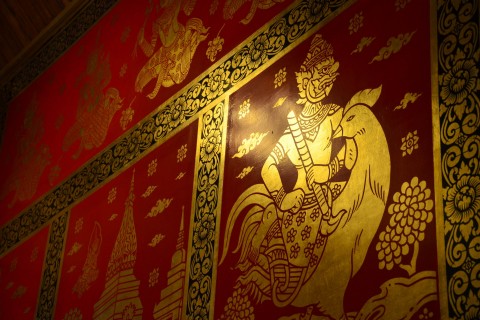 If you’ve got the time