One of Thailand’s most impressive
Published/Last edited or updated: 6th November, 2017

During rainy season, Thi Lor Su Waterfall thunders over 400-metre-long and 200-metre-tall vertical cliffs amid the dense jungle of Thailand's far western frontier. In the dry months it transforms into an angelic set of falls with refreshing pools to swim in. Visiting Thi Lor Su requires planning, time and effort -- and it's worth it.

Regardless of it's ranking, Thi Lor Su is the highlight of Umphang Wildlife Sanctuary, where clouded leopards and tapirs roam beneath 1,300 different types of palms. Wild bananas attract elephants from the untamed wilderness, which joins several other protected areas to form one of mainland Southeast Asia's largest contiguous forests.

After a multi-hour trip by four-wheel-drive vehicle and raft, if you choose, visitors arrive at sanctuary headquarters. From here it's a relatively easy three-kilometre hike along a concrete walkway to the waterfall. Some of the old bamboo trees are as thick as the Burmese pythons that hang from them. Dipterocarp trees tower high above, with niches in the trunks that are large enough to host a tea party.

After pausing to listen to the wise old bamboo creak in the breeze, we came to a series of small waterfalls emptying into a wide lagoon. We then caught a first glimpse of Thi Lor Su's upper tier through a break in the truck-size palms. Even at the end of dry season during a draught, the falls were breathtaking. Entire cliffs turn into a thundering sheet of whitewater during and just after the ... Travelfish members only (Full text is around 900 words.)

Please sign in to read the rest of this page. The full text is around 900 words.

Our top 1 other sights and activities in and around Umphang 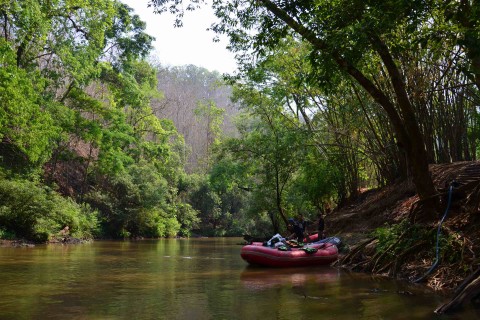