Ko Phitak is one of those sleepy fishing islands that goes almost entirely unnoticed. Few people beyond Chumphon province know about it—and that was what first piqued our curiosity. For tranquility, rural beauty and old-style island vibes, it’s worth a look if you enjoy offbeat spots on the Gulf of Thailand.

To be clear, Ko Phitak is not an “alternative island” in the vein of Ko Phayam or Ko Taen, for example. With a name that translates as “Protected Island’, Ko Phitak has no resorts or bungalow joints; only homestays attracting a trickle of Thai travellers. While this does not mean that foreigners are unwelcome, those who do not speak Thai should expect a language barrier. You will not find beach bars or travel agencies geared towards foreign travellers.

The two-square-km island’s west coast hosts a lone fishing village with houses built on stilts over a beach that floods with ankle-deep water when the tide is up. When strolling the sandy path through the village you’ll spot fish drying in the sun along with potted flowers, a tiny recycling centre and one of the island’s only shops, called 7-Elephant. It sells rice, fish sauce, crisps, beer and soda.

A few other stores sell basic goods to go with fish that’s preserved by being buried in sand—a method from before refrigeration that Ko Phitak’s natives are known for. You’ll also find plentiful shrimp and squid that collect in the bamboo-frame traps stacked up everywhere you look. Some of the homestays can arrange for travellers to join the fishers at work on their longtail boats.

A narrow brick footpath encircles the island, taking you through coconut groves and inland houses with papaya and mango trees dotting the properties. Cows roam, as do a few dogs that were notably friendly to us. Motorbikes are not allowed and the only vehicles we spotted were a few wee bicycles steered by children. The island’s peace and quiet seeps in fast.

To the north you’ll find Ko Phitak’s only beach, a roughly 300-metre expanse of grainy sand meeting a rocky seabed. Bring waterproof shoes along if you’re not keen on stubbing toes when wading. The beach’s only “development” is an unused shack and a concrete statue of a squid for your selfie pleasure. We encountered no one here, but do expect some stares and perhaps disapproving looks if you strip down to bikinis and Speedos. Again, Ko Phitak is rarely visited by foreigners and the islanders tend to be modest and traditional.

At the west end of the beach, a raised concrete walkway leads over to the uninhabited east side of the island, where Ko Tao is barely visible on clear days. Head over this way for sunrise and solitude.

The beach’s western end is marked by a white Chinese-style Buddha image that marks the start of a steep and lopsided stairway ascending through forest that cloaks the island’s only hill. At the top you’ll find a breezy viewpoint with a pavilion—a good place to unfurl a picnic. Stairs continue down the other side of the hill and drop you near the village.

Down at the opposite (south) end of the island you’ll find some mangroves and another stretch of sand with a few more houses. Not far from a shrine dedicated to the island’s ancestral spirits, a sand bar extends towards the mainland when the tide is low. The water gets so shallow here that runners flock to Ko Phitak every year in June for an organised “run through the sea” along a course that connects the island to the mainland.

Despite Ko Phitak’s closeness to the mainland, we found the water relatively clear and blue during our February 2020 visit. Homestays can arrange snorkeling trips to check out the giant clams on the east coast. Kayaks are also available and we reckon that paddling around the island and over to the uninhabited islet of Ko Kham would be a terrific way to lose half a day.

Speaking of homestays, every other house in the village accepts guests and they’re all fronted by a sign with contact info and a basic description in English. One of the largest is Koh Phitak Homestay, but they all look similar and come with simple fan- and/or air-con rooms and shared bathrooms. We had a chat in English with one of the men behind Ban Tontian Homestay at the northern end of the village—look for a map of the island on its porch.

The going rate for fan rooms is 800 baht (a bit more for air-con), including meals and possibly an activity or two. Note however that these homestays typically attract groups of Thais; anyone travelling solo or as couples might be asked to pay a little more for meals, which tend to be large portions of fresh seafood. Or you could do as we did and visit Ko Phitak on a day trip.

Getting there
Ko Phitak is located less than one km off the southern end of Ao Thong Khrok near the mouth of the Tako River in Lang Suan district. Boats are usually waiting at the pier; if not, the seafood vendors can call one to pop over from the island to fetch you. We were charged 40 baht per person, round trip, for the 10-minute ride. Our driver docked at one of the homestays and, when we were ready to leave, we simply returned to the same spot and shouted his name. It’s a small island and locals are helpful, but English is not widely spoken.

The pier at Ao Thong Khrok is 80 km south of Chumphon town and no public transport runs there, so you’ll need a vehicle. The main highway through the province, Route 41, gets you to within 15 km of the pier and signs point left at the turnoff for Ko Phitak. From there you’ll need to cut east to the seacoast and hang a left (north) for the final approach to the bay. Alternately you could venture to Ko Phitak from the capital of Surat Thani province, located 130 km to the south.

Our top 1 other sights and activities in and around Chumphon 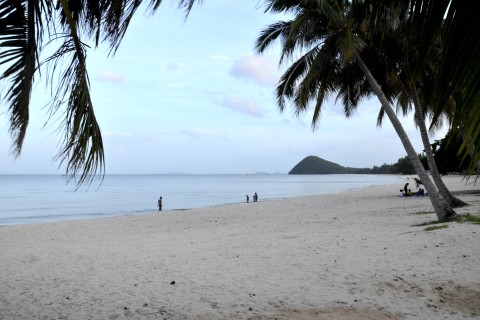