Exploring the Khanom and Sichon coast

Exploring the Khanom and Sichon coast

More on Khanom And Sichon

Beach bums who prefer to have at least a half-kilometre of sand all to themselves will dig the Khanom and Sichon area, where a few days of exploring could introduce you to more than a dozen different beaches, bays and peninsulas. Throw in some waterfalls, mountains, jungle-shrouded roads and coastal viewpoints, and you’ve got a seaside adventure worth penning home about.

While the nearby islands of Ko Samui and Ko Pha Ngan are both large enough for some serious coastal adventures, both are so heavily travelled that you’ll be following the well-trodden trails of countless other tourists. Few foreign travellers visit Khanom and Sichon, and even at the busiest times of year you’ll have no trouble finding some solitude on one of the many beaches. We didn’t make it to all of them, but we did explore a solid chunk of the coastline.

We started at the far northern point of Ao Khanom, where Haad Kho Khao hosts a slew of seafood restaurants on its golden sand. From here, a beach road runs straight south alongside Haad Nadan, a picturesque eight-kilometre-long stretch of fine, light-tan sand where you could easily drop anchor for the duration of your trip. Backed by coconut groves and a handful of resorts, umbrella and tonsai trees shade the wide beach in many places.

After passing the southern end of Haad Nadan, a clearly marked sign points left to Haad Nai Phlao and a narrow road ascends before dropping down into a small cluster of shops, eateries and resorts found just inland. While this crescent of fine sand is shorter than Nadan, the scenery is more striking thanks to a backdrop of mountains draped in dense tropical growth.

The road continues south for several kilometres from Nai Phlao, passing the turnoff for the small but refreshing Hin Dat Waterfall. Several unmarked trails diverge from the concrete and pierce through thin forests, emerging at rocky outcrops shaped by the surf. Some of these afford sweeping views back to Haad Nadan, with Ko Tean and perhaps Ko Samui looming vaguely in the background. A few wild boars snorted about near one path; they were harmless, but the red ants made us wish we’d worn shoes rather than flip-flops.

We chugged uphill, coiled around corners and whizzed back down before reaching the end of the road at Ao Thong Yee. This small bay hosts a restaurant that rents out tents for camping on the sand, though we found the beach littered with an extra-heavy amount of tidal garbage. It’s a strange, end-of-the-road sort of place, where derelict boats piled up, a monkey sat chained to a post and a so-called “Sea Turtle Learning Centre” didn’t appear to have any turtles.

At Thong Yee, we could have arranged a longtail boat for the three-kilometre ride further south to Ao Thong Yang, which stretches on the other side of Khao Phlai Dam. As it was getting late and we didn’t want to ditch our motorbike, we backtracked to Nadan and rested up for a night, setting out for Sichon the following morning.

On the way out of Khanom town on Route 4014, we made stops at Khao Dat Fa and the unimpressive-but-worth-a-quick-dip Tha Noi Waterfall before continuing to Route 401 and cutting south towards Sichon. We then turned left on Route 3009 and cruised to the coast, where Route 4232 runs north for some 12 kilometres. Along the way we passed two long and undeveloped beaches: Haad Thong Sai and Haad Bang Po.

Coming up over the hill from Haad Bang Po, we got our first glimpse of the area’s most isolated beach: Ao Thong Yang, which, as far as we could gather, also goes by the name of Haad Phlai Dam.

A highlight of Khanom and Sichon, Thong Yang is a long and lovely stretch of fine hazel sand tapering into rocks and forested hills to the north. It’s set to a backdrop of pristine tropical forest blanketing Khao Phlai Dam, part of a relatively small but impressive cluster of coastal mountains. Apart from a single resort and some concrete pavilions, a lone private house was the only development we noticed just off the sand. Not another soul appeared on the beach while we were there.

The fantastic restaurant at Khoplyedum makes Ao Thong Yang a go-to stop for lunch. As the surf rolls in and the red leaves of umbrella trees collect on the sand, kick back in your own private sala to indulge on authentic Southern Thai soups, salads and seafood dishes.

Before heading south towards Sichon, we noticed an English sign so faded that parts of it were indecipherable. The word “waterfall” made us turn inland—and the little-known Thong Yang Waterfall did not disappoint.

Motoring back south from the way we’d come earlier, we hung a left and crossed a bridge before emerging into Sichon town with its unexpectedly bustling scenes near the hospital. Cutting east towards the coast, we stopped near Pak Nam Sichon, the point where the Sichon River empties into the Gulf of Thailand and fishing boats chug over the horizon for another night of work.

Diverging south from here, we quickly arrived at a small beach backed by a Chinese shrine with a viewpoint and tree-lined public park. Just beyond that stretches Haad Sichon, where we popped in to say hi to local windsurfing expert, Mr Palm, at the excellent Sichon Cabana. The beach itself is a pleasant enough stretch of tan sand that partially submerges during high tide.

Continuing south along the coast, we passed the reddish rock formations that give Haad Hin Ngam (Beautiful Stone Beach) its name before hanging a left, and then another left, that came out at the far northern end of Haad Piti. Stretching straight south for several kilometres and with very few resorts, this was probably our second favourite beach in the area.

Coconut trees and beach shacks llining the off-white sand, Haad Piti doesn’t outmatch Haad Nadan on aesthetics alone. What we particularly loved about it was the atmosphere created by traditional Muslim fishing villages that line the coast. Old men patched up their longtail boats, goats and cows grazed under the trees and little kids flashed bright smiles as they pedalled past. It was a glimpse, we thought, of what most of Thailand’s coastlines must have looked and felt like before tourism took root.

While we didn’t venture beyond Haad Kho Khao on this trip, you could explore further north to Ao Thong Ching, Ao Thong Nien, Laem Prathap and into the Don Sak area of Surat Thani province. Beyond Haad Piti in the south, you could continue along many more miles of coastline, including several more beaches, all the way to the Laem Talumphuk peninsula that juts far out into the Gulf as if trying to point a finger back at Nakhon Si Thammarat town.

A motorbike rented in Khanom served us well for exploring the coast, though a car would be fine as well. Thanks to minimal traffic and smooth roads in most places, the Khanom and Sichon coast is also highly recommended for serious cyclists.

Contact details for Exploring the Khanom and Sichon coast

Address: North and south along the entire coastline.
Admission: Free 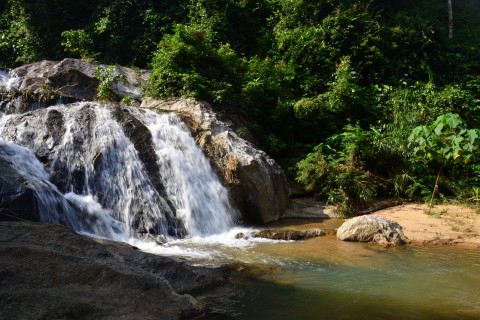 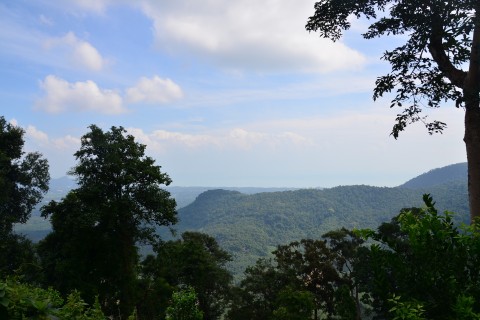 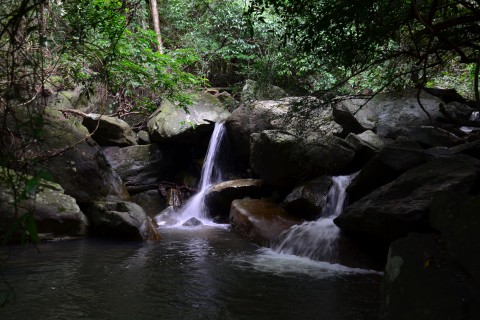 Not bad for a quick dip