The beaches of Ko Phayam

The beaches of Ko Phayam

Ko Phayam’s beaches range from secluded slices of sand hidden between mangroves to wide expanses that stretch on for several kilometres. All beaches offer plenty of space and are free of hawkers, jetskis and other annoyances found on busier islands, though sandflies are common. Also keep an eye out for giant sea otters swimming offshore.

Ao Yai
Also known as Long Beach, Ao Yai (“Big Bay”) boasts four kilometres of soft white sand. While narrow at high tide, it widens enough at low tide to host football and volleyball matches. It’s one of the few beaches in Thailand where the waves get big enough for surfing and boogie-boarding, and several resorts rent out boards. Phayam Lodge offers surf lessons as well. You can swim at any time but the sea often has stingers, tiny jellyfish larvae that make swimming unpleasant.

Pine-like tonsai trees tower to the south before a small canal that can be crossed easily at low tide to reach Ao Yai’s more secluded far southern stretch. The bulk of resorts are found along a central to southern section that can get noisy at night due to beach parties. Backed by flat land with quite a few trees, Ao Yai is great for watching sunsets and for jogging at low tide. In low season it bares the brunt of hissing monsoon winds.

North Ao Khao Kwai
Ao Khao Kwai (“Buffalo Bay”) is the name used for a single four-kilometre-long bay with two different beaches separated by a fairly long patch of rocks. North Ao Khao Kwai is the longer and busier of the pair. Its gold grainy sand is a letdown compared to South Ao Khao Kwai, but the swimming is good at any time. The atmosphere is mellower than at Ao Yai after dark, but livelier than South Ao Khao Kwai. At the north end, Hippy Bar throws monthly parties and most resorts have their own little bars. Neither of Ao Khao Kwai’s beaches sees big breaks like Ao Yai, making them better options for families with small children. We also like the scenery better here thanks to the hills that back the beach.

South Ao Khao Kwai
The smaller southern stretch of Ao Khao Kwai is totally different from its northern sibling. The sand is powdery white and the atmosphere very quiet, without a single freestanding beach bar. While the swimming is good for a couple of hours at high tide, low tide reveals silt flats stretching for several hundred metres. Head to the far southern end of the beach and you’ll hit some mangroves; keep south along the beach or a sandy road to find a hidden, undeveloped beach that’s great for sunsets.

Ao Kwang Peeb
Pretty Ao Kwang Peeb crowns the northern tip of the island with a small and sheltered crescent of khaki sand. There’s only one place to stay and it was controversially built into the jungle on a hill that backs the beach. Years ago it was only possible to get here by boat or a trail, but in 2011 a dirt lane was cut and motorbikes can now park close to the bay. The water is usually clearer here than at the bigger beaches, though the offshore reef is dormant and the snorkelling not spectacular. Wild monkeys often swing through the treetops behind the beach or stroll along the flower-lined access road.

Ao Mook
Stretching to the south of the pier on the east coast, Ao Mook is easily overlooked despite being so close to where visitors come and go. The northern section lies close to a public lane and collects litter, but trees back the much-better southern stretch. The water is swimmable at any time, even if most of the beach disappears at high tide. Forded by a concrete bridge, a canal cuts inland to a cluster of mangroves to the north. Brahminy kites often soar high above the beach before diving down to catch their dinners.

Ao Mae Mai
Lining much of the northern to central parts of Phayam’s east coast, Ao Mae Mai is a narrow beach that mostly disappears at high tide. Look north from the main east-coast pier and you’ll see it framing stilted houses and longtail boats. The quieter and less littered northern stretch is worth a trip if you seek solitude and perhaps a place to watch the sunrise.

Ao Ko Kyu
Steep steps lead down to this tiny cove in the southeast corner of the island. Umbrella trees back coral sand rimmed by rocks on one end and a forested hill on the other. At some point a bar was opened here but it was abandoned at time of writing, with only the Kue Lom Restaurant built on a hill high above the cove. The water here was the clearest that we found on Phayam and the beach won’t disappoint if you seek the less-travelled corners. 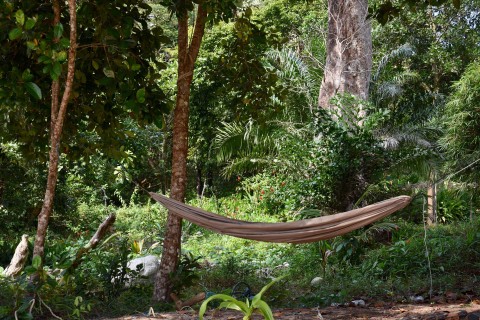