Watch out for the lizards
Published/Last edited or updated: 15th April, 2017

Home to sea gypsies, monitor lizards, longtail boats, rubber trees, white-bellied eagles, ocean treasures, butterflies, quiet bays, beautiful beaches and thick jungle where terrestrial spirits are said to whisper in the sea breeze, Ko Bulon Lae is a magical place. All it takes is a stroll to be enchanted.

Starting near the island's southern coast near Pansand Resort, mosey through a field where coconut trees and tropical chestnut flowers serve as picture frames for the Andaman Sea. Nearby, a little bungalow might just be the most adorable police station in the world.

Highlighting islander priorities, the largest and best patch of beachfront is backed by Bulon's modest school. This is the only island we know of where teachers rent out a few simple bungalows overlooking the sea and a breezy soccer pitch near the rundown basketball court. It may sound like an odd arrangement, but like most things on Bulon, it all fits together when you see it.

Keep strolling uphill past Marina Resort and Coconut Bar and you’ll then descend to a village filled with flower bushes, chickens, goats and colourful sarongs hung out to dry. Here you could chat with some islanders over fresh-cut mango or watermelon at a little shop, or pop into Su's Corner for a fresh cinnamon roll. Cut right and you’ll end up at low-key Panka Noi Bay.

Keep straight to Bulon’s north coast to arrive at Panka Yai Bay, a soothing strip of grainy sand with clear water flowing over a sheet of offshore rocks at high tide. Wander to the far western corner to find opaque sea glass, driftwood, shells and chunks of blue and orange coral that the ocean deposits on the shore. If you’re here late in the day, stroll along the eastern rocks to find a sunset view.

Wandering back inland, cut west past Jungle Huts and Mango Bar and you’ll pass through a cool rubber grove where milky white latex drips into bags or coconut shells. A farmhouse sits beside an enormous banyan tree as shirtless villagers wave to the travellers.

From here the trail cuts southwest through the centre of the island, winding alongside Bulon’s only freshwater stream. Wells that have been dug here explain why some Chao Lae families built their village on the sand of nearby Ao Mamuang. The namesake mango tree fell during a storm in 2012, but the handmade squid traps and buoys are still piled high.

On Mango Bay we spotted a two-metre-long grandmaster monitor lizard prowling for a snack beneath the stilted houses. A nearby sign proclaimed that this area is also “a fine habitat of Mangrove Pit Vipers. Although not vitally dangerous, its bites can cause serious pain.”

From here you’re just metres away from Ao Sabai Jai, another small beach that’s home to a bat cave that’s impossible to reach—unless you’re a talented free climber—due to a massive slab of vertical rock. We settled for an eerie sea cave leading to a rock face studded with mollusks donning shells adorned with lines shaped like sea waves.

Having covered almost every corner of Bulon apart from the western jungle that locals avoid due to the ghosts, it was time for a swim back at the main beach that stretches near the school and Bulone Resort. Shaded by coconut and casuarina trees with pink blossoms popping up amid fine sand kissed by clear water, this “School Beach” can hold its own among some of Thailand's best.

Bulon is so small that we did this walk in half a day, which included a leisurely meal and stops to check out the resorts. Strategically placed info boards will tell you about the birds, flowers, butterflies and snakes. Bring binoculars and you might spot a Nicobar pigeon or orange-bellied flower pecker. 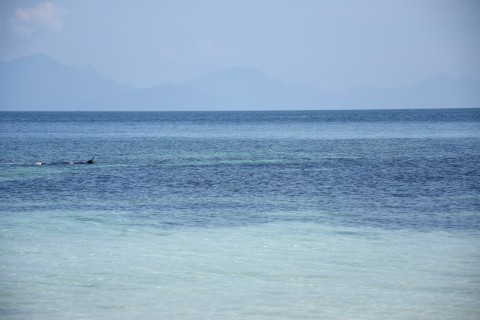 Go for a spin