Crystal water splashes up to two long stretches of white sand and several smaller beaches on Ko Lipe. Reefs also surround the island and while much of the coral is in rough shape, you’ll still find some decent snorkelling spots where you don’t have to worry too much about the boat traffic. Each beach has a different vibe -- read on to find the ones that suit you best.

Sunrise Beach
Lipe’s longest beach runs for more than a kilometre along the east coast before curving west at a magnificent northern patch of sand with a view to Ko Adang. In the south it narrows to a slender stripe at high tide, but that northern curve is wide around the clock. From top to bottom you can swim at any time and the water is often so clear that looking down at the coral from above the surface is comparable to being underwater with goggles on. At low tide you can reach the offshore islets of Ko Kra and Ko Usen by a mix of swimming and wading.

While not rough to walk on, most of Sunrise’s sand isn’t quite as fine as on Pattaya Beach. The exception comes beyond some boulders in front of Ten Moons and Serendipity at the far southern corner, where the sand is as soft and white as flour. Sunrise Beach is also the place to watch the moonrise, perhaps with a cocktail from Sea La Vie. Sunrise has always been quiet compared to Pattaya Beach and we prefer the soothing scene perpetuated by resorts like Gipsy and Castaway.

The best place to swim is off the wide northern curve near Andaman Resort, followed by the roped-off swimming area fronting Castaway. Sunrise often sees brisk wind and choppy water (though not surf-worthy) from October to January before calming from February to April, a period when the beach is at its best. Lipe’s only school fronts a northern patch of Sunrise, and a trash barge docks here a couple of days each week.

Pattaya Beach
A kilometre-long crescent of fine sand as white as snow, Pattaya Beach faces south with the eastern end reaching just far enough for a sunset view. It was the first beach to host resorts on Lipe, and we’ll never understand why someone named it after Thailand’s sex tourism capital -- the scene is not seedy and the beach is 100 times better than those found in the actual city of Pattaya near Bangkok. It’s also wider than most of Sunrise Beach.

Rocky headlands on either side keep the clear water calm for most of the year, but this also results in the majority of Lipe’s boats anchoring here -- the central to eastern stretch turns into a speedboat and longtail parking lot in high season. You can swim in large roped-off areas fronting the pricey resorts, and it’s safe to snorkel around some coral near the rocks at the far western end.

Pattaya Beach hosts a string of bars clustered to the east beyond Walking Street, which merges directly with the sand. Overall we feel the beach has a more generic holidaying vibe than Sunrise, but you’ll find mellow exceptions at places like Cafe Lipe, Blue Tribes and Daya. The eastern stretch also hosts the immigration checkpoint, police station and national park desk, with a military camp covering a forested hill atop the southern headland.

Sunset Beach
Northwest-facing Sunset Beach is, you guessed it, a go-to spot to watch the sun dip behind Ko Rawi’s rugged hills. In recent years the national park has taken control of the area, forcing out long-standing businesses like Flour Power, Sabye Diving and Porn’s Bungalows. At time of writing the only businesses operating directly on Sunset Beach were two makeshift bars. The white sand has some black grains mixed in and you can snorkel among the offshore rocks and reefs.

The western coves
On either side of Lipe’s long and slender western arm you’ll find tiny beaches accessing some of the best and safest snorkelling sites. On the south coast stretches Sanom Resort’s pretty beach reached by an inland lane or a walkway leading across the rocks from the western end of Pattaya Beach. Sanom put up signs telling non-guests to stay out, but that wouldn’t stop us from checking it out. The other south-coast beach is Haad Kra, an undeveloped stripe of sand that’s worth the hike further west.

West of Sunset Beach on the north coast, forested hills back a string of sandy coves that each hosts one resort. You’ll have trouble getting through security at the incongruous Asara Private Beach Resort, but the folks at Bila Beach and Pitiusas are happy to let you hang around and perhaps rent a snorkel to check out some of Lipe’s best-preserved reefs.

A must while on Lipe 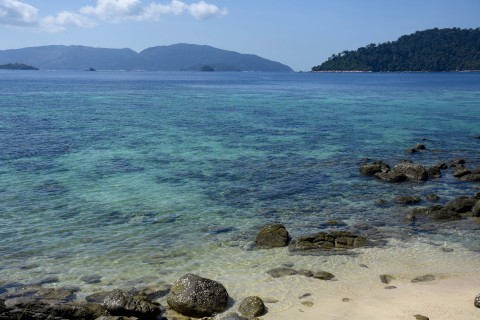 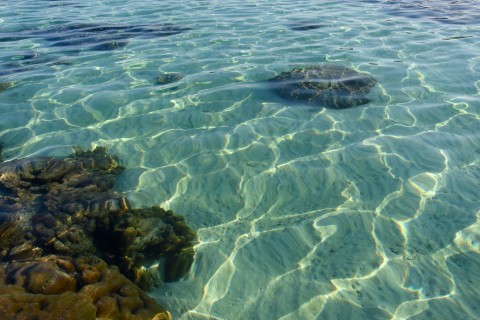 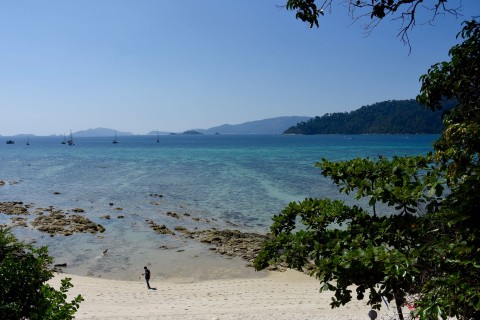 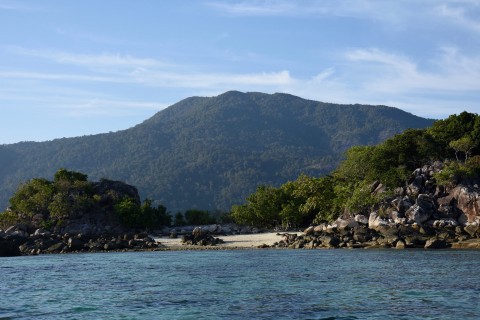 Out of that hammock!