From 1937 to 1948, Ko Tarutao was "seen as a hell in the deep sea," according to an information board at the entrance to the Ao Talo Wao historical trail. Of the roughly 3,000 prisoners interned here at the Talo Wao Prison, hundreds died of disease and starvation, and many more became feared pirates. Informative signs and dilapidated buildings provide a glimpse into this riveting chapter in Thai history.

After losing a pedal and doing some on-the-spot repairs while on the 16-kilometre bike ride from park headquarters at Ao Phante, we were met by a rarely used pier that cuts to a striking karst formation amid the calm emerald sea. An old national park building sat abandoned nearby. Apart from a couple of other cyclists, the only people we saw were a pair of fishermen docked near the cliff.

The trail begins with a wooden walkway spanning a mangrove swamp where a monitor lizard made a ku-plunk when it heard us. We also spied hornbills, macaques and tree snakes while cycling the brick-and-cement path that pierces into forest thick with strangling vines. The place has an eerily desolate feel, not least because of the many 70-year-old structures gradually being reclaimed by the jungle.

Complete with illustrations, the first of a dozen comprehensible English signs provided background on how the prison materialised in the late 1930s. "The fact that the island is surrounded by deep, shark-infested waters as well as inhabited by dangerous wildlife such as crocodiles" ensured that prisoners had no hope of escape. If given the choice, many would have preferred to remain in a tiny cell on the mainland.

Living conditions were harsh, with 120 prisoners crammed into rustic wooden longhouses. Wild animals and spirits were widely feared. Prisoners who behaved well and worked hard, or otherwise found ways to gain favour with the guards, were often promoted to easier jobs like clerical work or making handicrafts. Most spent long days logging and hauling wood.

Those who misbehaved faced beatings and other punishments, such as being chained to a heavy concrete wheel or "basking in the sun for 10 to 15 days continuously" (interesting word choice there). The most unruly prisoners were sentenced to solitary confinement in an "underground pit with a wooden trap door just high enough to stand up and reach the five ventilation outlets."

Supplies stopped reaching the prison during the Second World War, when hundreds of prisoners starved to death and many more perished from malaria and dysentery. Some 700 corpses were buried in a common cemetery that today looks like any other patch of jungle. A small spirit shrine stands as the only hint that so many souls met their ends here.

Rather than retreat to the mainland, both guards and prisoners began pirating merchant ships in the Straits of Malacca. They murdered some sailors and set fire to ships before stashing booty on Tarutao and many other locations, including the Emerald Cave on Ko Muk. The DNP website quoted a British sailor from the time: "The rich and beautiful islands seemed to have become mutated into some nightmarish landscape."

When the war ended, the British Navy quickly invaded Tarutao and rounded up the prisoners, guards and wardens, virtually all of whom were guilty to some degree. With the situation under control, Talo Wao prison was officially closed a decade after it opened. Eleven kilometres to the south, the Talo Udang site for political prisoners was also shut. The 11-kilometre road between the two, built by prisoners, is now an overgrown trail.

Ao Talo Wao is located about halfway down Ko Tarutao's remote east coast. The trail is around two km in all, with a couple of side paths cutting inland, making it conducive to exploring on foot or by bicycle.

To get here from Ao Phante, head south on the only road and continue straight rather than turning right towards Ao Molae and Ao Son. The crumbling road winds up and down some steep hills, and this not-so-easy bike ride took us over an hour each way, not counting time spent repairing our forsaken pedal. Bring plenty of water and be sure to leave early enough that you won't have to ride back in the dark.

A pick-up truck taxi can also take you here for 600 baht, though these aren't always available. The other option is longtail boat; we were quoted 2,500 baht to Ao Talo Wao by boatmen near the pier at Ao Phante, which seems expensive. However, the driver did say that he'd also go down to Ao Talo Udang for 500 baht more. 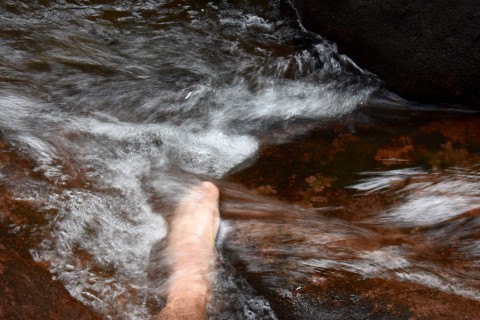 For cycling, hiking and swimming 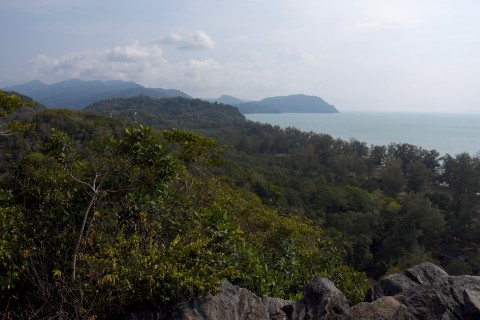 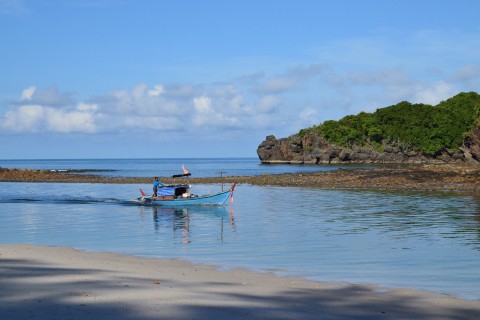