Interesting displays in a beautiful manson
Published/Last edited or updated: 9th May, 2017

Set in the gorgeous Colonial-era Kuden Mansion, Satun’s own National Museum is more comprehensive than we expected.

Built in the late 19th century, the stately house first served as residence for Governor Phuminart Phakdi and hosted dignified guests like King Rama V before serving as headquarters for Japanese officers during the Second World War. It features varnished teakwood floors and louvered shutters that have been painted bright teal. Even if you’re not interested in the exhibits, the European-style building is attractive enough to at least warrant a walk by.

Phuminart’s original bedroom has been recreated with many of his personal effects and photographs, and there’s also a shrine where locals and visiting Thais pay their respects to a man seen as a founding father of Satun.

Other rooms display ancient weaponry, traditional buffalo head-shaped kites (a Satun symbol) and the wooden frame of a boat that’s thought to be over four centuries old. Provided in Thai and comprehensible English, interactive exhibits and films discuss Satun’s distinctive culture and its various ethnicities, languages, foods and religions.

Also check out a display covering Ko Tarutao’s old prisons and how the inmates turned into feared pirates during the Second World War. Another provides info on the local sea gypsies, though it wrongly states that they call themselves "Chao Lay" when in fact this is the Thai term for a nomadic fishing tribe that calls itself Urak Lawoi. You’ll also find models of tribal villages and a life-size display of what a typical Satunian house would have looked like a century ago.

The museum is located in the centre of town on Satuntanee Soi 5. If coming from the clock tower, walk north for a couple of blocks and take a left just after where the night market sets up.

Our top 2 other sights and activities in and around Satun 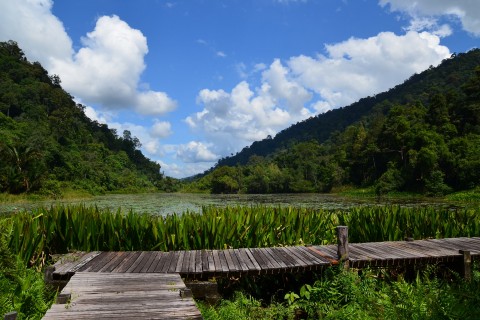 If you have time on your hands

Say hi to the monkeys