If you have time on your hands
Published/Last edited or updated: 9th May, 2017

A couple of waterfalls are worth checking out on the way here, and you might spot some wildlife, but the namesake "lake" might disappoint when the lotuses aren’t in bloom.

We set off on a motorbike rented from On’s Living Room in Satun town, cruising north along Highway 406 before diverging onto the quieter Route 4184, which cuts back south towards the national park headquarters and border crossing. Two waterfalls were on our agenda: Ya Roi at 6.7 km north of the main park gates and Ton Plio (also spelt Piew) a few kilometres further north.

Riding leisurely past remote mosques and villages as steamy mountains rose sharply to our left, we came first to the small brown sign for Ya Roi Waterfall and wondered if we’d missed the turn for Ton Plio. After finding the small parking area and gate for Ya Roi deserted, cement steps carried us alongside whitewater cascading over a few small drops.

The official website describes Ya Roi as having "nive" tiers, and we never did figure out if it was nine or five. What we can say is that two of the tiers are lovely, with water rushing over two-metre-high boulders framed by dense jungle. The steps give way to side paths towards the upper tiers, where it was slick in places. Down at the bottom, the clear stream was just deep enough for a dip.

Continuing south through checkpoints manned by machine gun-touting soldiers (common near any border checkpoint in Thailand), we were greeted by a more friendly looking monkey at the main Thale Ban turnoff. The three women who collected our 200 baht per person entry fee looked surprised to see us; we don’t reckon they get many foreigners out here.

The headquarters includes all of the typical Thai national park infrastructure: sealed parking lots, a sparsely staffed restaurant, a few bungalows starting at 600 baht a night and a large visitor centre with info and brochures in Thai only. Considering they charge foreigners 500% more than Thais, a little English would be appreciated. On the other hand, the king cobra preserved in a glass jar was enthralling.

We wandered to a rundown pavilion near walkways overlooking a small swamp-like lake, known as Bueang Thale Ban, that was supposedly formed by an earthquake three centuries ago. Trees that have been found at the bottom of the lake support this belief. Few of the lotuses and waterlilies were in bloom during our visit, and the park’s namesake body of water wasn’t exactly awe-inspiring.

Some 300 bird species, including eight types of hornbills, have been recorded in the park along with Malayan tapirs, wild boars, gibbons, civet cats and the rare glandular frog, which holds on to its tail for life. The majority of the birds are found in the park’s vast mangrove forests and can only be peeped by hired boat from Thammalung Pier on the Andaman Sea coast—nowhere near park headquarters. While we didn’t glimpse any of the wildlife mentioned here, we did encounter a monitor lizard and hand-size centipede near tiny Panee Waterfall. Do watch your step around here; the several preserved poisonous snakes displayed in the visitor centre aren’t just for show.

Neither Panee nor the little lake were anything to write home about, and while a 700-metre-long nature trail made for a decent hike, we weren’t impressed by Thale Ban’s main section. Apparently a cave can be found somewhere, but the visitor centre officials couldn’t (or wouldn’t) tell us how to get there. The entry fee would make more sense if it included the waterfalls, but both of them can be hit for free.

On our way back towards Satun, we were determined to find Ton Plio, which the website claimed to be "the most beautiful waterfall in the park". Not seeing any signs, we plugged the name into our maps app and, surprisingly, found it pinpointed several kilometres down a side road. Locals looked shocked to see us as they shouted "Hello!" and assured us that there was indeed a nam tok (waterfall) down this way.

The lane cut through jungle for several kilometres until pavement gave way to rugged gravel and a fairly steep hill that tested our 100 cc motorbike. Finally, we began to hear a faint roar. A trail led us down to the first of several mid-size tiers where the rapids churned over tall rocks into deep pools. With no indication that the area is part of the national park, we saw no other people or any facilities at this very remote waterfall on a Sunday afternoon.

Beware: Nam Tok Plio looks like a great place to go for a swim, but three leeches latched on to our legs and shoes in the 30 minutes that we spent hopping along the rocks and trails. Check your body thoroughly if you swim, including up your nose!

To get here from Satun, head north on Satun Thani Road (Highway 406) for 20 km and hang a right at the large intersection in the town of Khuan Don, following signs to Wang Prajan. After another eight km, take another right at the fork onto Route 4184, which runs straight down to Thale Ban. The whole trip is 40 km one-way from downtown Satun to Thale Ban headquarters.

If you want to hit Plio Waterfall first, go slow and look for an old mosque with a faint Roman letter sign that says "Mosgue Thungmaperang." The left turn is another two or three hundred metres south of that, between the police box and homestay. From here you can continue south on 4184 to Ya Roi Waterfall, located a half-km down a side road that's marked in English by a brown sign, and the main Thale Ban gate.

Occasional songthaews and minibuses do run to/from Wang Prajan, but they're infrequent and you'd most likely have to wait for quite a while along the side of the road in a remote area on the way back, or try to hitchhike. You could however arrange a motorbike taxi or mini pick-up truck taxi in Satun to take you out here for somewhere between 500 and 1,000 baht roundtrip.

Our top 2 other sights and activities in and around Satun 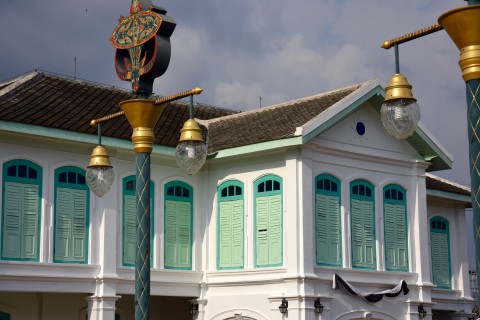 Interesting displays in a beautiful manson

Say hi to the monkeys