How to do Khao Sok national park independently

How to do Khao Sok national park independently

Though options for independent exploration in Khao Sok National Park are limited due to the park’s requirement that travellers be guided on most trails, you do not have to join the flock and book an all-in package tour. There’s plenty to do on your own and you can always take an independent approach by arranging trail guides and boat drivers only when needed.

The 739 square kilometre park is only independently accessible at two places. The first is the park headquarters area, or the “land section” at the far western end in Khlong Sok village, where buses drop off along Highway 401. The second is the launch point for Chiew Lan Lake, or the “water section” near Ratchaphrapa Dam and the town of Baan Ta Khun at the park’s eastern end. We know of one other way to reach the lake, but you’ll need a guide.

In the vicinity of park headquarters it’s possible to hike several km on two main trails unguided, and the park provides basic trail maps at the visitor centre. Those looking to trek further to Than Sawan, Ton Kloi and Sip Et Chan waterfalls can hire a park-provided guide for 600 baht per half day. Most park rangers don’t speak much English and often see themselves as guardians rather than guides, but the price is cheaper than if booking in the village.

At Ratchaphrapa Pier you’ll find prices posted for boat tours to Little Guilin plus one rafthouse. The cheapest and most popular costs 1,700 baht and stops at the park-run Nang Prai Rafthouse. For 2,300 baht you can go several km further west to Smiley Rafthouse, while a day trip to distant Khlong Saeng Rafthouse costs 4,500 baht. These prices are for the whole boat with a maximum of 10 people, providing great value for groups. It’s also possible to string together custom boat trips at the pier.

Staying on the lake independently involves a fairly straightforward process of booking a longtail boat to your rafthouse, where the driver will sleep in his boat and bring you back the next day for 500 baht extra. If you have no reservation, see if a staffer at the pier will check availability around the lake.

If you speak some Thai and are willing to part with a big chunk of cash, you could spend several nights on the lake with the same boat driver, staying at different rafthouses as you go. Most rafthouses offer guided caving and trekking, so there’s no need to bring a guide with you from the start, although having one would give you more freedom since it’s unlawful for travellers to be unguided on any land around Chiew Lan save the dam and pier area.

Our most recent boat driver even gave us a business card and told us to call him if we ever wanted to arrange another trip. Like most drivers he speaks very limited English, but he had no qualms with adapting our tour on the fly once we established a dialogue in Thai.

Early morning is considered the best time for a boat trip on Chiew Lan Lake thanks to the mist that looks haunting alongside cliffs and dead trees reaching from the water. On our last update we tried a late-afternoon cruise that finished up just shy of sunset, and found it equally enjoyable with less boat traffic on the lake. The pier opens daily from 06:00 to 16:00. 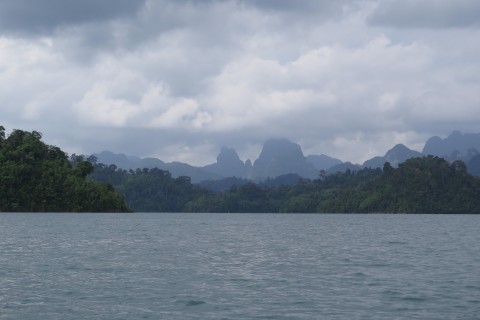 Tours and activities in Khao Sok 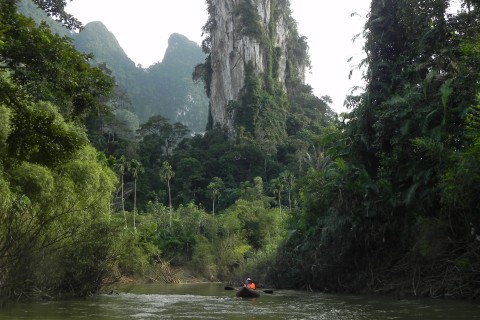