When we inquired about touring the sites related to the Vietnam War, Mr Huynh paused, visibly perplexed.

“In my 15 years of doing this, no tourist has ever asked me to do a war tour. Only veterans or professors. Why do you want to do the tour?”

It’s true, there’s nothing to see in Kon Tum per se. Most of the war sites here have been returned to nature—as much as something can return to nature after being carpeted with Agent Orange. Kon Tum province was the site of one of the bloodiest and most definitive battles of the Vietnam War. By spring 1972, the US Army had already begun their withdrawal from ground involvement in the war. The outcome was teetering on an edge; who won control over the Central Highlands would win the war.

So why? We (us travellers in general, I mean) base a great deal of our travel on tangible experiences and photo opportunities. We plant a proverbial flag into the country we have travelled—I have seen this, I have done that—and the same is true for sites of dark tourism: I have crawled the Cu Chi Tunnels. I have seen the skulls at the Killing Fields. It’s easier for us to feel we have taken away something meaningful from the tragedy. But in Kon Tum, there’s nothing on display in careful glass boxes, no black and white photos to hammer home lessons of the past. Kon Tum is about ghosts and scars.

Rocket Ridge runs north-south parallel to Route 14 like a giant raised scar. Its barren profile is clearly visible from Phoenix Airfield, also known as Dak To Base Camp and Dak To II Airfield, now just a bare empty patch of asphalt farmers use to dry cassava. On Rocket Ridge, the US Army had built a chain of fortified artillery positions known as Fire Support Bases or FSBs for short to shield the roads, the supply route and to stop the enemy approaching Kon Tum from the north. The ridge was a South Vietnam stronghold. If the North Vietnamese Army wanted to attack Kon Tum, they would first have to break through the fire line of Rocket Ridge. And they did.

Huynh wanders the overgrown brush around the airfield and finds two American army spoons, an old Budweiser beer can and two pieces of artillery debris the size of a Tic Tac. He lights them and though it is small, it erupts into flames, intense fire angrily spitting out as an acrid smoke swells and billows, the stench filling our nostrils.

Huynh knows what war smells like—he lived it and he survived it. Looking around it’s hard to believe that only four decades ago this quiet, forlorn landscape was hell on earth. In the spring of 1972, North Vietnam had launched the Easter Offensive, also known as the Nguyen Hue Offensive, and one by one the FSBs fell. Both sides suffered heavy casualties. By the end of April, the South Vietnamese Army was forced to escape the FSBs. The stream of Montagnard civilians fleeing down the roads to seek refuge in Kon Tum were indiscriminately mowed down by North Vietnamese shellfire.

Visiting the ghosts and scars of Kon Tum is not for everyone. History buffs can easily see the spots on their own, but for those who are unfamiliar, a guided tour is an insightful way to grasp how this empty patch of “nothing to see” cost a nation everything.

Though the tour is mostly of interest to veterans and professors, the tour is of course open to laypeople. Highland Eco Tours’ one-day program costs US$45 per person, less if there are more people. We also recommend you do at least a day tour visiting ethnic minorities to balance the outlook and mood. Visit the office at 41 Ho Tung Mau St or contact at T: (090) 5122 037; huynh.kontum@gmail.com; vietnamhighlands.com.

To see it on your own:
Skull Hill or Skull Slope is located 16 kilometres north of Kon Tum city on QL14 at 14.474377,107.933893. After the war, a large number of human remains were unearthed here and it is said 700 North Vietnamese soldiers were killed in this spot. The monument is located up a set of stairs on the western side.

Across the road is a small, modest shrine to the untold number of South Vietnamese who were killed. An interesting historical note is that those who died fighting for the South were buried in a separate cemetery—untended and uncelebrated—if they were buried at all. But according to traditional Vietnamese beliefs, burials must be handled scrupulously and respectfully and the graves regularly visited to appease the departed spirits and appeal for blessings. “Second spirits” are those spirits that have not been cared for or whose remains cannot be found.

The shrine has been erected across the road, invoking in Chinese characters an ancient name for Vietnam. The phrase applies to both north and south but has a hidden meaning that honours those who died for the South. “Dong Sanh Lac Quoc” first translates as “We were born in the same country,” but depending on how it is read, it can also mean, “We were born and we lost the country.”

It is a spiritual touchstone. Drivers who pass still lay incense and cigarettes as an offering. It’s no coincidence that there are very few homes in this area. Locals believe there are a lot of ghosts and it is said wailing can be heard.

One kilometre north from here is the memorial for the North Vietnamese killed in action. The obelisk-like structure is surrounded by a fence and locked gate.

Twenty-five kilometres further on QL14 is the town of Dak To. At the centre is a roundabout containing an impossible to miss Rong house and a war victory monument with two Russian tanks belonging to the North. The tanks were brought down from Hanoi on a long, tortuous journey via the Ho Chi Minh Trail. After the failed Tet Offensive in 1968, the North Vietnamese Army rebuilt itself for the Easter Offensive with the newest tanks, artillery and anti-aircraft weapons from Russia and China. The NVA’s new strength with tanks would play a critical role in their attack on the Central Highlands.

The placard on Tank code number 377 explains it belonged to Platoon 3-Company 7-Battalion 297-Central Highlands Front and on April 24, 1972, it destroyed seven M41 enemy tanks to help “liberate” the Dakto-Tan Canh Base. It names the four North Vietnamese soldiers who died in the tank. Unfortunately the placard for Tank Number 472 was missing when we visited in November 2015.

From the roundabout, head west, in the same direction towards Bo Y (Vietnam) and Phou Keua (Laos) border, and travel five kilometres to reach Phoenix Airfield and at a distance, Rocket Ridge and Charlie Hill.

For a scenic route that covers these sites, try this motorbike loop.

(We used as a reference: Thomas P. McKenna, Kontum: The Battle to Save South Vietnam (2011); thebattleofkontum.com/summary/index.html.) 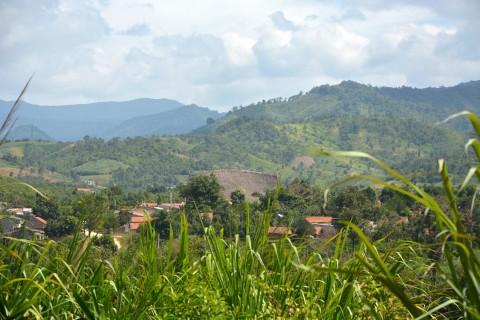 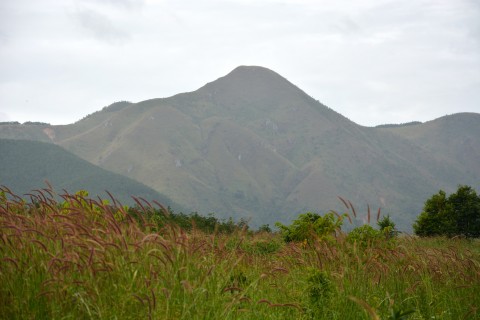 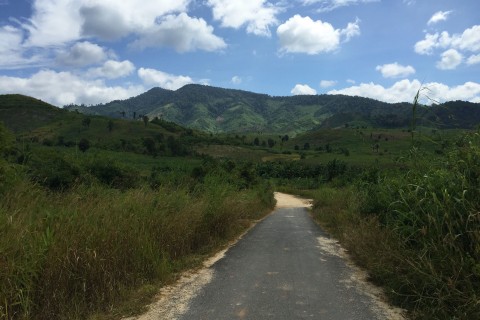 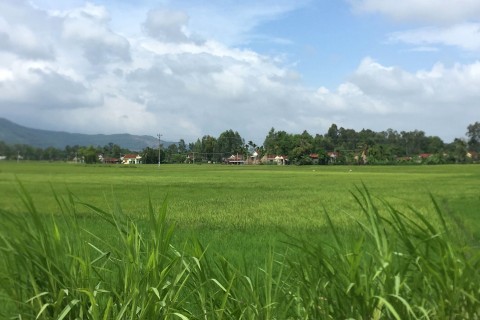 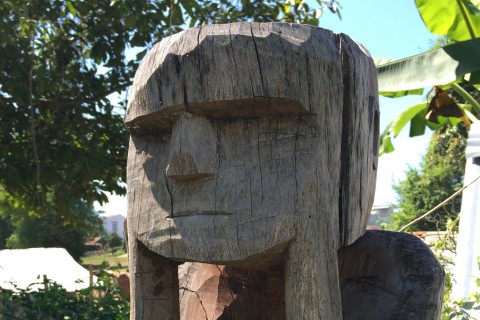