Of all the architectural advancement of the city over the past decade, the people of Da Nang are most proud of their bridges – all nine of them to date.

Pre-1997 there were only two bridges on the outskirts of the city, the first built during French rule and the second the 2013-renovated Nguyen Van Troi bridge, which was originally constructed during the war by the Americans, and now serves as a foot bridge in the shape of a scallop. It has a 149-metre high observation deck in the centre made accessible by an elevator in an adjoining tower for visitors to enjoy the view.

In 1997, the same year that Da Nang took its independence from Quang Nam, the iconic Han River bridge, Vietnam’s only rotating suspension bridge, was completed. If you’re up between 02:00 and 03:00, the bridge rotates 90 degrees to give access to large commercial ships passing through from the port, a very popular sight for domestic and local visitors.

After the opening of the Han River bridge, the newly formed Da Nang government pledged that every bridge built in the city would have unique characteristics.

Of all the bridges in the city, the most revered are the Rong (Dragon) bridge, a 166-metre, six-lane steel bridge designed to look like a dragon flying over the river, and the 731-metre Tran Thi Ly bridge in the shape of a giant sail. Both were opened in March 2013 and come alive at night when their array of coloured bulbs light up the city.

Every Friday and Saturday evening at 21:00 the dragon comes alive, breathing fire and water towards the east. It’s a spectacular display, and even if it’s just to absorb the energy of the atmosphere, it’s well worth timing your visit to Da Nang around this time of the week. 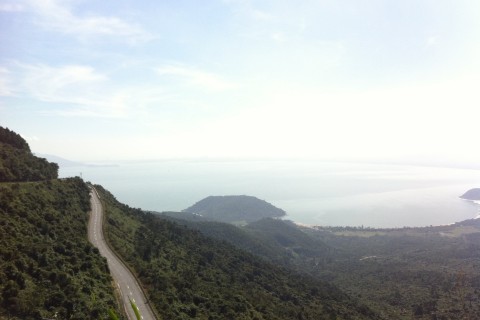