The Ben Hai River is the centre of the DMZ, the official dividing line between Vietnam’s north and south.

Though it has enormous significance, for the average traveller it is little more than just a stop with little to see.

In July 1954, at the Geneva Conference with representatives from France, Britain, the United States, the Soviet Union, China, Laos, Cambodia and North and South Vietnam, agreements were made that the French would withdraw their troops from northern Vietnam and the country would be divided in two until elections, at which time a president would be decided and the country reunited. The boundary was the Ben Hai River, which runs along the 17th parallel, with a five kilometre buffer extended on either side becoming the demilitarised zone (DMZ). In that instant, families and loved ones were physically divided. It was a fateful step towards a bloody war that would tear the country apart. (The elections never happened.)

The large concrete monument on the south side depicts this separation of families with a Vietnamese woman and her child, standing and gazing across. It memorialises the plight of many Southern Vietnamese women whose husbands crossed to the north after the agreement, thinking there would soon be free elections and the country would be united. During the same period, many North Vietnamese, mostly Catholics fearing persecution, crossed over to the south.

The original bridge was destroyed in 1967 but it has been rebuilt, painted two different colours the way it was back then. You can walk across this bridge.

On the north side of the river there is a monument with a flag, replicas of watchtowers and the loud speakers that would blast propaganda to the other side. There’s the house where a UN Observation Committee worked from 1954 to 1965 though you can give it a skip: there’s black and white photos of the team and nothing else. Across the road is the museum, worth a look to see photos of what the DMZ was like and aerial shots of the river banks obliterated by carpet bombs. 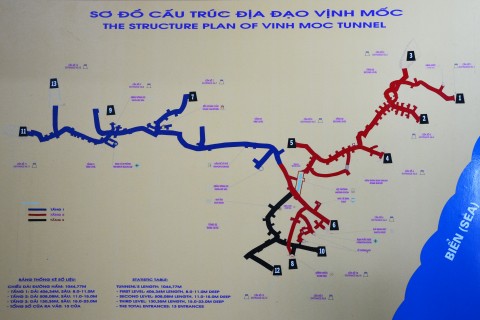