While told from a clearly pro-government perspective, the Hanoi Police Museum showcases the interesting history of Hanoi's police force and offers some fascinating photographs and exhibits to explore.

Set in a thoughtfully laid out and spacious single-storey building, the museum has exhibits labelled clearly in Vietnamese, French and English, and takes the visitor through the chronological history of the police force in the Vietnamese capital.

The force was founded in 1946 out of the Tonkin Security Police. While they were still the Tonkin Security Police, the officers "were engaged in the fight against the traitors and the collaborators of the French and the Japanese in order to protect the party and the revolutionary movements and participate in the insurrection of 1945." The initial exhibits of photos, documents and weapons take the visitor through the police efforts to expel the French and "kill the traitors", from 1946 through to 1954.

The next room covers 1954-75 and the police fight against the CIA as Vietnam slides into war with the United States. Another room traverses 1975-86, when the capital expands dramatically and national and international forces conspire "to destroy the creation of socialism in Vietnam"; all is well, however, as the Hanoi police work hard to expose these networks.

Finally, 1986-2015 brings the police force up till today, more or less, when the focus tends to be on drugs, cyber crime, fake goods—and even exam cheaters. Look for the wig on display that a cheater used!

On display are the uniforms of the police and their various departments over time, a motorbike or two and a few dioramas, such as an example of a police station in the 1990s. We followed our noses and walked into what we thought was an example of a realistic police office today... only to realise that it was actually a real office, not open to the public. Oops! We thought it was realistic!

Very friendly staff told us the museum was originally set up for the private viewing of the police force, but a new chief insisted it should be open for public viewing, so its doors were thrown open to all in 2015.

The staff cheerfully asked us to rate them on TripAdvisor; we didn't do that, but we are listing them here! The museum is definitely worth an hour's exploration, particularly if you're visiting Hoa Lo Prison, about 100 metres away. Those with a particularly interest in history or the police will find it particularly fascinating, but even the average traveller will find a quick spin through to be illuminating.

Samantha Brown is a reformed news reporter. She now edits most of the stuff you read on Travelfish.org, except for when you find a typo, and then that's something she wasn't allowed to look at.

Our top 10 other sights and activities in and around Hanoi

One of Hanoi's best museums 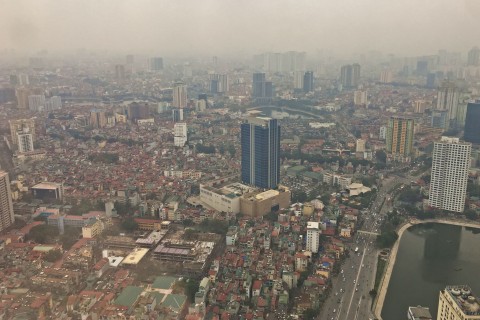 A symbol of Hanoi's resilience