Get under the water
Published: 18th November, 2016

The warm waters of the Gulf of Thailand make Phu Quoc a popular spot to take a peek under the sea and get PADI certified. Diving and snorkelling on the island is best from November or December until March, which is the exact opposite to other Vietnam dive sites of Nha Trang, Whale Island and Hoi An.

Most dives take place in the shallow waters off the northwest coast of Phu Quoc. Tiny Turtle Island (Hon Doi Moi) west of Vinpearl Resort/Bai Dai beach and Fingernail Island (Hon Mong Tay) close to Bai Vung Bau have a pretty reef of hard and soft coral. Sadly there are no large fish left to be seen in Vietnam, but you’ll find the usual tropical reef suspects including butterfly and angel fish. Clarity depends on the time of year and weather. The absolute maximum you can hope for is 15 metres. But visibility just isn’t what it used to be.

A former Phu Quoc instructor told us that clarity has been reduced and pretty poor for the last couple of years now and it’s no surprise, given its proximity to the Mekong Delta and the amount of change the island is undergoing. There is also a believable rumour that Vinpearl has purchased Turtle Island and have plans (groan) to build a connecting bridge.

For snorkellers, the reef is more beautiful in the An Thoi islands, an archipelago off the southern tip. Though commercial boat tours advertise they go there, they never venture further than the very top. Dive centres also don’t go there unless they have to. More petrol = more money.

If you’re serious about snorkelling, we highly recommend you go with a dive centre rather than one of the island’s many cheap boat tours. For an extra US$8, you’ll be joining a dive boat which tend to be well organised and safety oriented. You also have a Divemaster on board whose primary job is to supervise and ensure everyone makes it back to the boat. We had a great time with Flipper Diving Club and the daytrip was professionally run, with excellent equipment, personable staff and a comfortable boat that had a pleasant upper sun deck. It was US$25 including hotel pick up and a filling lunch. Rainbow Divers is also well regarded.

Another reason we recommend trips offered by Flipper Diving Club and Rainbow Divers: they take care not to anchor on the coral. We saw three cheap tour boats dropping anchor right on the reef, ironically destroying the very thing that was giving them business. Their passengers were also stepping on the coral so clearly they had not been told not to.

Cheapie boat and snorkelling tours are advertised all over the island, with John’s Tours and Red River Tours being the most prominent. You get what you pay for, and since US$17 with lunch isn’t very much, they will find ways to charge for extras and the trip includes a mandatory stop at pearl shops. As mentioned earlier, don’t count on them actually going to the southern islands despite what the brochures advertise. We had previously reviewed John’s Tour, which included 30 minutes of fishing and a stop at Bai Sao, a beach which you can easily visit yourself by motorbike. The overall trip was just okay, so if you want sun and sea, this is the budget way to get on the water. 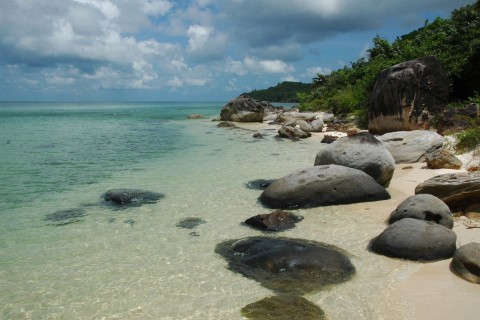