A blast from the past
Published/Last edited or updated: 24th August, 2017

When North Vietnamese Army Tank 390 burst through the front gates of Independence Palace at 10:45, 30 April 1975, it effectively marked the end of the fall of Saigon, the end (or liberation) of South Vietnam and the end of the Vietnam War.

Photos of the palace with tanks has joined the ranks of iconic Vietnam War photography, while the building itself—now called Reunification Palace—is one of the city’s top attractions, a must for any first-time visitor to Ho Chi Minh City.

The 1960s modernist building was actually a replacement for Norodom Palace, which was built by the French in 1873 to the tune of 12 million Francs. Black and white photos of the palace show a grand neo-Baroque building with a central dome, gardens and a ceremonial room that could accommodate 800 guests.

It was a lavish expense, especially since its original purpose was short lived. Initially it was the residence of the Governor of Cochinchina. When the Union of Indochina was formed in 1887, it was ruled by a Governor General in Hanoi and Cochinchina was given a mere Lieutenant Governorship. The residence of the Lieutenant Governor was moved to what’s now referred to as Gia Long Palace (currently the Ho Chi Minh City Museum), while Norodom Palace was relegated to ceremonial purposes and gradually fell into a state of disrepair.

During World War II, the city and building saw power shuffles, with Japanese occupation replacing France and then Japanese surrender restoring the French, lasting until the French defeat on 7 May 1954 at the Battle of Dien Bien Phu. Following the monumental Geneva Conference, which divided Vietnam into North and South, South Vietnam’s first President Ngo Dinh Diem took up residence in the palace, renaming it “Independence Palace”.

Diem’s rule was divisive to say the least. In 1962, two South Vietnamese Air Force pilots bombed the palace’s left wing in an attempted coup. Diem survived and ordered the palace be demolished and a modern one built, designed by French-trained Vietnamese architect Ngo Viet Thu, winner of the prestigious Grand Prix de Rome.

Diem never saw the new building’s completion. He was assassinated on 2 November 1963, three years before Independence Palace was opened. It was the Presidential Palace and South Vietnam government headquarters until that fateful day in 1975. General Duong Van Minh, who had been president for 43-hours, sat waiting with his cabinet members for the North Vietnamese Army to arrive. When tank officer Col. Bui Tin entered the room, there was this famous exchange:

“I have been waiting since early this morning to transfer power to you,” said Minh.

“There is no question of your transferring power. Your power has crumbled. You cannot give up what you do not have.”

It sounds like a Game of Thrones script, or poetic justice. Minh had been part of the conspiracy to oust President Ngo Dinh Diem. When Diem and his brother surrendered, Minh gave the signal—raising two fingers of his right hand—to carry out their assassination.

The building is 26 m high with 95 rooms spread over 20,000 square metres. It boasts features typical of modernist buildings of its era. The meticulously manicured front lawn is dominated by a water fountain. Inside the building is 1960’s decor at its finest. The attention to keeping the building in a time capsule, right down to mod furniture and a game of dominoes on the table, is enjoyable though some liberties have been taken with kitsch. The photo of JFK behind the desk is an amusing touch.

The signage is good, with explanations of each room in Vietnamese, English and French, obviously written from the view of the victors who “liberated” the south. Signs also explain how architect Ngo Viet Thu drew inspiration from ancient ideograms (essentially Chinese characters) to the building’s structural plans. For example, the symbol for three (three horizontal strokes), which can be seen when facing the building, represents the trinity of humanity, wisdom and firmness of purpose. From above, the building’s shape is the symbol for luck. Obviously the luck went to the other side.

The main floor contains the cabinet room, state banqueting hall and conference hall where at 19:30 on 21 April 1975, South Vietnam President Thieu delivered his resignation speech—the beginning of the end.

There are arrows to follow to flow through the palace, though they are often hard to spot. We noticed most people miss the stairs to third floor, the President’s retro-fabulous chambers which has a closet that many would be envious of. Find the stairs on the front right (orientation facing the building).

While the ground and upper floors are stately, it’s the basement that truly amazes. Below is a network of concrete war rooms that could be used in the remake of Dr Strangelove. The basement tunnels, built to withstand bombing, is where South Vietnam’s war effort was conducted from and the telecommunications epicentre. Back on the ground floor, wander through the original kitchen and not so original gift shop full of plush toys. Movie rooms playing a documentary in English, Chinese and Vietnamese round out the experience inside.

War machines are displayed on the grounds, including replicas of the famous tanks (yes, plural). Up until recently the official account had Tank 843 as the first to breach the palace gates but this was rectified in 2015, giving Tank 390 the credit. In any case, the originals are now in museums in Hanoi while visitors here will have to content themselves with copies.

Reunification Palace takes at least an hour to explore fully and the building will be packed—the two hour lunch closure only exacerbates the crowd levels. Going first thing is a good idea to avoid group tours and the heat. 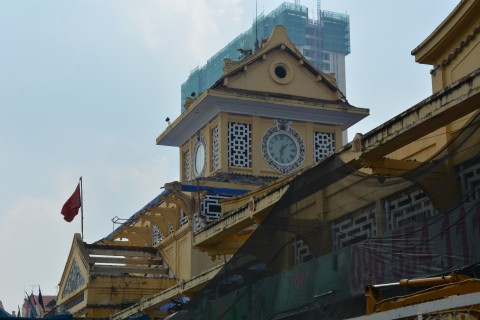