Located on the coast south of Qui Nhon city are a few sites that make sense to visit together, however disparate they are.

Within an area known as the Ghenh Rang landscape park (khu du lich Ghenh Rang), the tourist area contains a rocky beach—said to be the last queen of Vietnam’s favourite—a park with a sand beach, a tomb of a famous poet, a leprosy village and leprosy hospital.

Head south along the city’s ocean boulevard until the end. An Duong Vuong turns into Han Mac Tu and on the left hand side, after the large resort, there is a road steeply leading up. After about 550 metres, there’s a cafe and a trailhead for the Queen’s Beach (Bai Tam Hoang Hau). Follow the path down to the rocky shoreline. It’s not ideal for swimming but judging by the number of Vietnamese couples, it’s ideal for romantic selfies.

It’s another 2.5 km of hilly paved road to the top of the headland and entrance of the park, admission 5,000 dong and 2,000 dong for a motorbike. Look for the tomb of Han Mac Tu, a celebrated poet known for his love poetry. He was among the leprosy patients aided by French missionaries here before he died at the hospital in 1940.

Central to the manicured grounds is a memorial statue park with busts of important social activists, humanitarians, scientists and leaders that have helped leprosy patients, from the father of modern medicine Hippocrates, to more recent French and Vietnamese physicians. At the other end of the grounds is a leprosy village and the Quy Hoa National Leprosy Dermatology Hospital, a government hospital where those affected by the disease can receive free treatment. The hospital is not open to the public but you can certainly walk around the village—we received nothing but warm smiles and waves. We saw most people were busy with work, chores and karaoke just like any other village.

We spoke to Linh, the head of the hospital’s International Cooperation Department, and learned that the village had approximately 500 leprosy patients, ranging from those showing no physical symptoms to those who are disabled and require special shoes, equipment or prosthetics. The village began in 1929, with French missionaries forming a colony to help lepers at a time when they faced severe discrimination from society. The hospital in its current form was opened in 1999 and it mainly supports 11 provinces in the Central Highlands. They receive about 50-100 new cases a year, however, overall leprosy is under control in Vietnam as the number of new cases are decreasing every year.

Flanking the park and hospital land is Quy Hoa beach. It’s a popular spot on weekends and public holidays for picnics and barbecues, but otherwise it’s a low key quiet place for a swim.

Numerous signs give directions to (as if entreating you to visit) the ICISE Explora-Science Centre (International Centre for Interdisciplinary Science and Education). We followed the signs to a gated compound containing a pristinely manicured garden and a sleek, futuristic looking building surrounded by a moat and jungle covered hills—it looked like something out of a science fiction movie, completely out of place. The security guard allowed us in to wander and the building, which has state-of-the-art kitchen, auditorium and conference rooms was completely empty yet clearly being tended to daily. Another security guard saw us and shooed us away. It’s strange there are so many signs yet it isn’t (officially) open to visitors. It was purpose-built for only a few science conferences a year and it’s there if you want to gawk at it.

The road in front of the ICISE leads to QL1D which you can take back to Qui Nhon (this is the back way to the leprosy village, park and beach). Or return the same way you came.

Overall, it’s an interesting side trip if travellers have time in Qui Nhon. Those keen on exercise, it can be done on foot, difficult on bicycle given the steep inclines. Otherwise, go by motorbike or taxi—we spotted a few taking Vietnamese tourists up to see Han Mac Tu’s tomb.

Within the memorial park, we were approached by one man begging for money. Should you wish to make a donation there are hospital projects including patient support, home building and aftercare. Also, the hospital informed us the village has a patient council and they could distribute any donation. 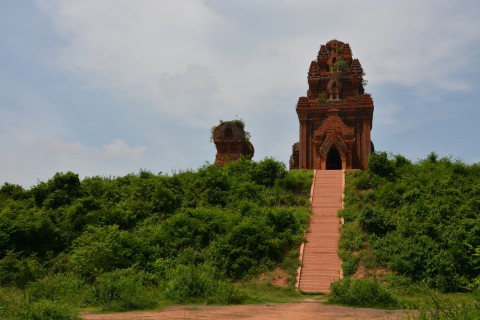 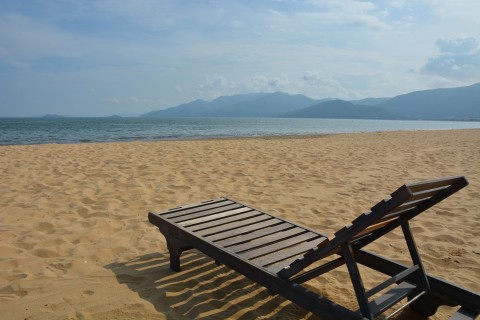 Some great beaches to choose from 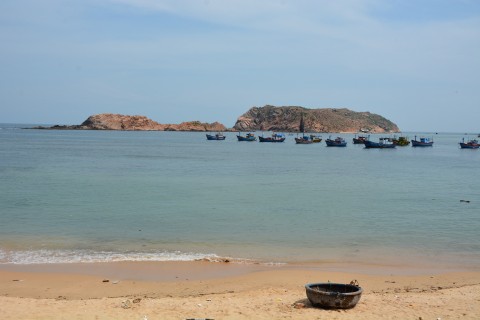 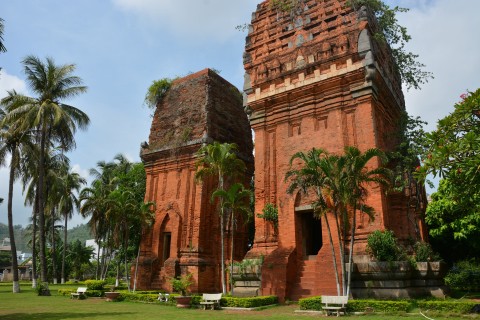 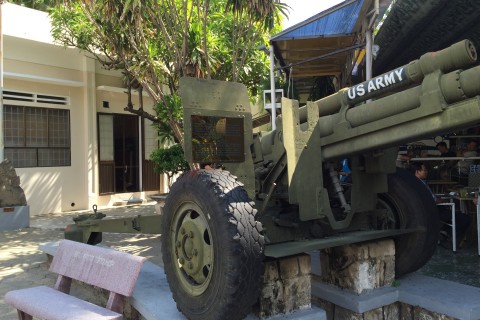