Late last night I arrived in Bali’s new airport, cleared immigration and customs and headed out to get a taxi home from the official taxi kiosk. I’ve written about Bali’s airport taxis on a number of occasions, primarily advising of the set fares and updating it when the fares went up after the rise in cost of petrol. 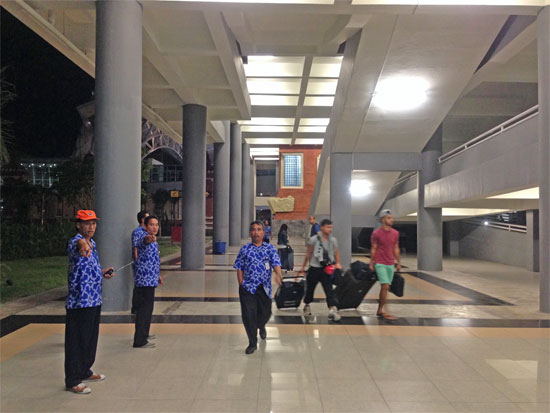 My 100,000 rupiah saviour approached. Note the tourists walking back into the terminal behind him.

As I walked out of customs, I noticed a taxi stall before the exit (just before they force you to walk through another idiotic duty-free area) and assumed it was one of the overpriced limo service scams like what they continue to rip tourists off with in Bangkok. With no price signboard, I ignored it, and walked through to go to the kiosk.

Problem: The kiosk was gone.

I continued to walk down to where the taxis park and passed some disgruntled looking foreigners heading back up to the terminal. Hmmm, not good. Upon arrival, I found no kiosk and no price list. I did though find a guy in an Airport Taxi T-shirt sitting in the gutter writing out chits for taxis.

“The Melasti, in Legian?”

This was followed by a long discussion between a bunch of the drivers about where Umalas 1 is.

Some back and forth here, and there were now myself and two other groups arguing with drivers, then:

“You no pay, you walk out to the street and get your own taxi.”

Ahh, a great welcome to Bali from Bali Airport!

I wasn’t going to budge so I went to walk back to the terminal — after all, you have an official taxi booth to avoid the crap of haggling over a fare. One of the guys then got on the radio and called another driver, who said yes, sure 100,000 rupiah, no problem. We moved to leave.

A female traveller, new to Bali, was asking for the meter to be used and was told, “No no, we’re airport taxis, no meter.”

So a new sole traveller arriving in Bali was being told to pay a random and inflated fare by a guy writing tickets sitting in the gutter.

No signboard. No clear prices. No information AT ALL. Midnight arrival, tired travellers being ripped off by the official Airport Taxi guys. Nice.