Bangkok reveals itself in the details: the intricacy of flower garlands sold along footpaths; overpowering scents from a flaming wok; an old man peering out from his medicine shop. The only way to fully appreciate it is on foot, but walking in Bangkok can be dangerous if you’re not prepared. Keep our pedestrian safety tips in mind to ensure that your urban exploration will leave you in one piece. Thankfully, Asoke Road can be avoided by way of a skywalk.

Stay out of the way
In Bangkok, motorised traffic almost always has the right of way. This will come as a shock to travellers from some Western countries, where, even away from designated crossing zones, motorists often politely display their palm or flash their headlights to signal that they’re stopping to let you cross. In Thailand, both of these signals have the opposite meaning: STAY OUT OF MY WAY. When crossing even the smallest of side streets in Bangkok, it’s your responsibility to make sure that no traffic is coming from any direction. Period.

Motorbikes are everywhere
This is an important one: motorbikes commonly drive (illegally) on footpaths, go the wrong way on the wrong side of the road, or burst out of tiny alleyways with reckless abandon — or some combination of all of the above. While they may tend to go slowly to do their best to avoid pedestrians on footpaths, this is not always the case. Always keep your head up and be ready for motorbikes to pop out of unexpected places. This motorbike seemed to interpret this zebra crossing as a sign to speed up.

Never trust a zebra
In North America they’re called crosswalks while Europeans and Australians might know them as zebra crossings: white lines painted on the road that, in theory, are designated crossing areas for pedestrians. Thailand has tried to institute zebra crossings but motorists nearly always ignore them, even when pedestrians are clearly waiting to cross. Our advice for Bangkok: pretend they don’t exist at all.

The walk signal means it’s all clear, right?
Some larger intersections with traffic lights come with the usual “walk” and “don’t walk” symbols for pedestrians (though many don’t). It’s generally safe to cross when the traffic is stopped and the “walk” symbol displayed, but even then, you need to be aware. Often there are exit/entry lanes that don’t correspond to the traffic lights, and vehicles often ignore pedestrians while making a left turn on red. If a vehicle is moving forward, wait for it to stop or pass before proceeding. 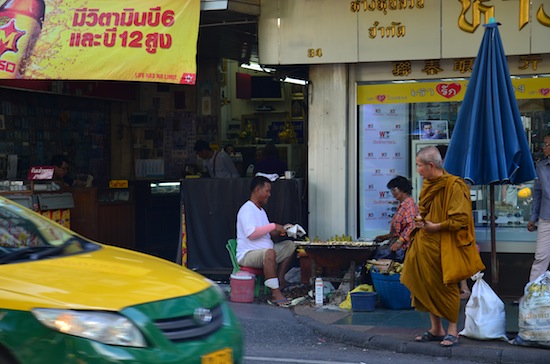 The art of jaywalking
You’ll often see locals “wading” onto heavily trafficked streets, pausing in the middle of the road as cars whiz past and waiting for that precious moment when the other side can be reached safely. This is dangerous, but there are times when it’s the only viable option. Always do it quickly — there’s no shame in hustling. Watch the locals and you’ll see that there’s a certain smoothness to jaywalking in Thailand.

Strength in numbers
You’re always safer when crossing with a group rather than by yourself, and there are times, particularly at zebra crossings, when a crowd of pedestrians grows large enough to assert itself onto a busy road. If you need to cross and can see that a few other people are also waiting to cross nearby, go join them and take that fateful step together. 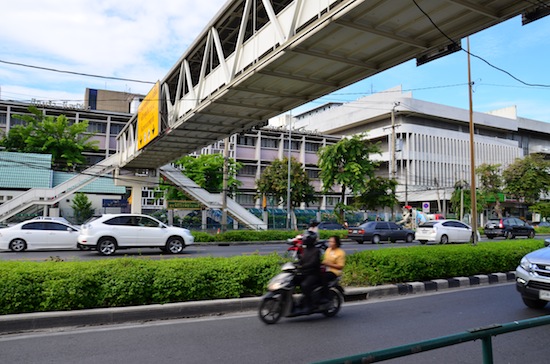 Elevated footbridges are your friends
Though they often don’t seem to be there when you need them, many of Bangkok’s busier roads are equipped with elevated footbridges, or saphan loi. Never follow the example of many locals by crossing a busy street on the ground when a footbridge isn’t too far away. We’ll use a footbridge even if it means going a half-kilometre out of our way. As an added bonus, you’ll get a bird’s eye view of a colourful street scene.

Metro stations make great crosswalks
Skytrain stations function the same as elevated footbridges, and some are equipped with attached elevated walkways that allow you to avoid the busy streets altogether. Subway stations are even better since you can walk all the way from one end to the other, crossing major intersections in the process. A good example is Silom MRT station, which can shoot you under busy Rama IV Road, connecting the east end of Silom Road to Lumpini Park. 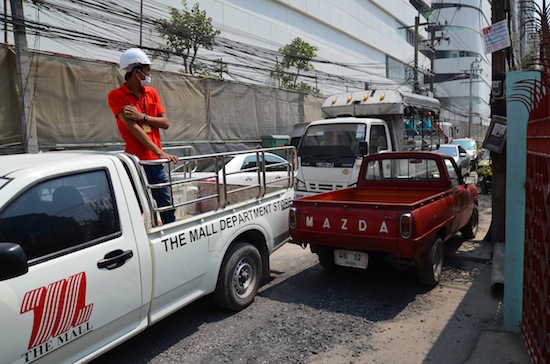 Construction workers doing their best to make a soi impassable for pedestrians.

Think it’s a one-way street? Look again
This is a feature of Bangkok roads that we’ve found nowhere else: to ease congestion, a single lane on a large road that typically has traffic flowing in only one direction will sometimes be opened for traffic coming in the other direction. Even on roads that are always one-way, it’s not uncommon for motorbikes, and sometimes cars, to go the wrong way.

Walking and smartphones: a dangerous combo
So that maps app on your smartphone is working wonders for your urban exploration. That’s great, but every second spent looking at the screen while moving greatly increases your chances of getting hit. When you need to consult Siri or text Mum a picture of you devouring fried bugs, step aside and stop.

When in doubt, wait it out
In Bangkok, traffic often flows like an endless torrent of water. We’ve stood waiting for many long minutes for a gap in the flow that might have been wide enough to run across the street. And then we waited some more. If there’s one thing we’ve learned from living in Bangkok, it’s that patience can be a life saver.