Most visitors to Hanoi will have some occasion to use the train station, whether travelling north to Sapa or down the coast on the Reunification Express. So here’s a quick guide to where it is, how to buy tickets and what to expect when you get there. 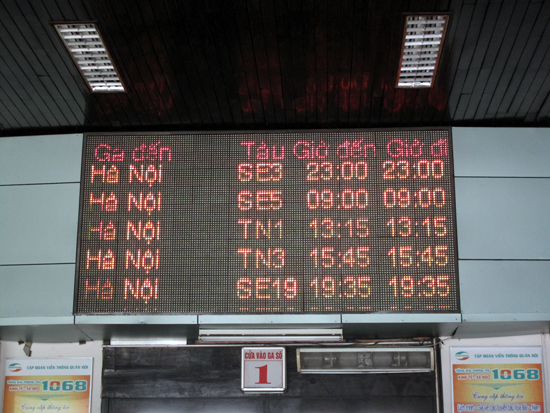 As high tech as it gets.

The train station is split into station A and station B. Station A, the main one, is located on Le Duan Street, just under two kilometres from the centre of Old Quarter. It’s an imposing, grey concrete structure clearly marked as Ga Ha Noi.

Enter through the main doors, under the sign, and the ticket office is on the left. Large white posters are pinned to the walls displaying train times and prices: the Lao Cai and Hai Phong posters are next to the main doors and the Reunification Express posters are round the corner. They’re a bit hard to navigate, and we’ve been told that prices are not always completely up to date, but at least they give you a starting point. Not quite art deco.

At the entrance to the ticket hall sits a small machine manned by a couple of staff. If it’s operating, take a ticket number and go through. Given the Vietnamese aversion to queuing, it’s not guaranteed that you’ll get seen in exactly the right order, but having a ticket is better than the free for all that occurs when it’s out of action.

Ticket numbers are called out and appear on the screen over the booths, so keep an eye on that and head to the correct booth when called. Be assertive and push past anyone who tries to jump the queue or you really won’t ever get served. It is possible that once they realise you don’t speak Vietnamese — if you do, good on you — they will direct you to a different booth, where the operator is more likely to speak English, so the pushing may need to start again.

Our advice is to write down where you want to go, the time, the train number and the type of seat — in Vietnamese — and show that to the operator. If you don’t mind what train you’re on, or are flexible on dates, make a note of that too. Make sure you check the ticket when you receive it. Take some patience with you.

All that said, a lot of the tickets are sold on to agents well in advance, so chances are you won’t be able to get a ticket at the station. If you’re on a really tight budget and have the time, then it’s worth a go, but sometimes paying the extra few dollars to an agent is worth it. We don’t recommend leaving it until the last minute.

Doors to the tracks run along the back wall as you enter and the waiting room is on the right of the main entrance. It can also be accessed directly from the car park outside. When the train is ready for boarding you will be directed through the correct door and have to show your ticket to an attendant. Platforms are reached by walking over the tracks. You may be approached by people trying to carry bags or ‘upgrade’ your ticket: avoid them and head straight to your carriage.

Station A has a few food and drink options outside: Lotteria, a fast food burger chain, is dominant, with smaller stalls near the waiting room. You will also find vendors on the platforms selling drinks and snacks. They tend to charge more than the minimarts and stores so buy in advance if you can.

Parking is available at 5,000 VND for a motorbike. Pay in advance and collect a ticket. Note that your bike is likely to be moved so don’t panic if you can’t see it straight away when you get back.

Station B, for trains to the north, is on the other side of the tracks and reached by an entrance on Tran Quy Cap. To get there, walk across the level crossing off Le Duan to the north of the station and follow the road round to the left. Tickets to Lao Cai can be purchased here. Ticket office opening hours are 04:00 to 06:00 and 16:00 to 22:00, though we have seen it open at other times as well, so it might be just luck of the draw. A bit less imposing than Station A.

When arriving for your train at Station B, if you’ve bought a ticket from an agent on one of the private carriages — which make up a large proportion of the train carriages nowadays — you will need to exchange it at the relevant desk. Don’t worry, it’s easily done. Desks are either just inside the waiting area — on the right of the ticket office — or in one of the huts at the back.

When your train is up on the board in the waiting area, walk through the gate for a ticket check and to reach the trains. The same rules apply regarding not giving anyone your ticket or bags. Food options are more limited than for Station A — well, there’s no Lotteria — but plenty of snack food and pho sellers can be found both outside the gates, on Tran Quy Cap, and in the car park.

One last note: as always, watch out for dodgy taxis when you arrive at Hanoi station, particularly if arriving early in the morning. Take a Mai Linh, and make sure they use the meter.