For many first time visitors to Southeast Asia, a visit to a "travel doctor" is a part of the pre-departure planning. Invariably discussion revolves around nasties like rabies, hepatitis and malaria as there are preventative shots, pills and potions you can buy for all these. What gets discussed far less frequently, yet in all likelihood you're just as likely to pick up, is dengue fever.

One of the reasons dengue doesn't get brought up, is because there is no pill potion or shot for it — if you catch it, you just have to ride it out — but unfortunately, for too many people, dengue kills.

What is dengue fever?

Dengue fever is a virus which is caused by any one of four related viruses (DENV 1, DENV 2, DENV 3, or DENV 4). There is also the more serious Dengue Hemorrhagic Fever (DHF). Each of the viruses is slightly different, meaning that if you've already had one strain of dengue, you are not immune to the others — sequential infections put you at greater risk for dengue hemorraghic fever. The virus manifests itself via high fever, severe pain behind the eyeballs, in some cases a bad rash, and in most cases extreme pain in the bones and joints (especially in the lower body). This last symptom led to the virus also being known as "Breakbone Fever".

A typical "dengue experience" lasts around a week to ten days. It commences with loss of appetite, a high fever and aching joints. It is after the fever subsides that the changes in platelet count normally occur. This count needs to be closely monitored as treatment is determined by how low your platelets are. Left unmonitored and therefore untreated can lead to death.

There is no "cure" for dengue. Instead painkillers can be taken to bring down the fever. It is important to note that aspirin and non-steroidal anti-inflammatory drugs such as ibuprofen (otherwise known as brufen or nurofen) must be avoided as they 'thin' the blood and can worsen the situation. Muscle relaxants can be taken in an attempt to reduce the bone and joint pain. Once hospitalised, patients may be placed on a drip and have a blood test each day to monitor their platelet level. In cases where platelets drop too far a platelet transfusion may be given and in extreme (life threatening) situations a blood transfusion takes place. 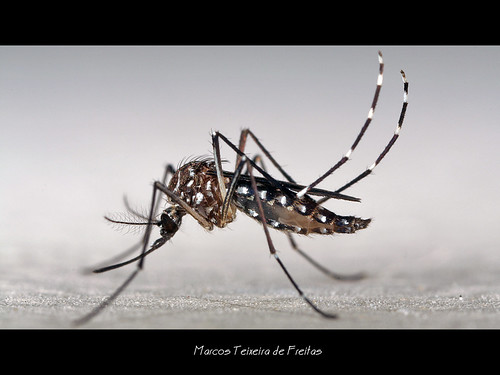 How do you catch dengue fever?

The virus is spread primarily by two types of mosquito Aedes aegypti and Aedes albopictus. They tend to bite in the early morning and have white bands on their legs. They like to rest in cool, dark areas, like cupboards and under beds and are extremely resilient to control measures. The CDC (Centre for Disease Control) says "if we were to eliminate all larvae, pupae, and adult Aedes aegypti at once from a site, its population could recover two weeks later as a result of egg hatching following rainfall or the addition of water to containers harboring eggs."

Dengue fever can take up to four days after infection to begin displaying symptoms and it can take a number of blood tests to determine that an infection is present.

How to protect yourself from dengue fever

Unlike malaria there is no preventative medication for dengue and a vaccine is not currently available. The only way to exercise preventative care is to avoid being bitten by mosquitoes. There are a number of core practices that can help reduce the chance of you being bitten.

How big a problem is dengue fever?

Unlike malaria, which is primarily found in rural areas, dengue is found both in rural and urban areas. This substantially increases the risk for casual tourists.

When I was being treated, the doctor said that last year (2009) there were around 4,000 dengue cases in Bali. This year, as of September, there had been 8,000. While generally a disease of the tropics, fatalities have been recorded in cooler climates from Perth to Paris as well. If you return to your home country and start to display symptoms, it is crucial that you explain to medical staff you have just come from a "dengue region" as they won't suspect it otherwise.

The CDC estimates that there are over 100 million cases of dengue, worldwide, each year while the World Health Organisation (WHO) estimates that there are 50 to 100 million infections annually, including 500,000 DHF cases and 22,000 deaths, most of which are children. In 2010, dengue fever outbreaks (not including countries where the virus is normally present) have been recorded in Australia, Pakistan, Puerto Rico and USA.

Turns out you don't have to ask around much to find others who had dengue — here are three examples (from myself and two travellers) who all had dengue around the same time.

I came down with dengue in September 2010 and was bed ridden for a week, including a two night stay in hospital. I woke up feeling a little off and within a couple of hours had a 40 degree fever. By afternoon was suffering intense pain in hips and lower legs along with exhaustion. Couldn't walk without considerable pain. The pain in the eyeballs was intense and maddening. It was two days before dengue was confirmed (by blood test) and I went to hospital once my platelet level fell below 70,000 (on day five). Once in hospital, was put on a drip and kept under observation for two nights.

I felt like I had the worst hangover that lasted days. I had headaches, my eyes hurt when I would move them, and my fever was around 104F (40degC) for a couple of days. Of course, when your temperature is that high your body gets sweaty and you start getting the chills. After the fever passed, it felt like I had mono. I was tired all the time and didn't have an appetite to eat much. When I did eat, I wanted the blandest food possible, which is weird for me because I love spicy food. It took me a while to get my appetite back. I was lucky in that I had only mild bone pain.
Kyle blogs at "On Our Own Path", recently hit 1,000 days of straight travel and is currently hanging out in Chiang Mai.

It started with flu-like symptoms... very achy and fatigued and just a general feeling of being sick. Then I got a horrible headache with pain behind my eyes, which worsened whenever I moved my eyes. It got so bad that I had to move my head whenever I wanted to look at something. Not moving your eyes at all is MUCH harder than you'd think! Around the same time as the headache started, I also started feeling very feverish- chills, sweating, etc. Over the next few days all of the symptoms got increasingly worse. My muscles and joints hurt so much I had to lay in bed all day, which actually worked out well since I was so tired, I slept all day every day. I actually had all of the symptoms of Malaria, so I went to the hospital to get tested for that. They told me that no, I didn't have malaria, but surprise! I had dengue! As the disease started to clear up towards the end, my fever was on and off. Once the fever had completely broken, my body was COVERED in an incredibly itchy rash. My hands and feet were unbearably itchy, and the rest of my body was covered in a hive-like rash, that ended up spreading so much that you couldn't see a single spot of "normal" skin on my arms, legs, or stomach.
Brianne blogs at Mai Ow Pet.

Thanks to our resident nurse, Susanne, for sorting out my medical hoo haa in the story. Thanks Sus!

And a very special thanks to my better half @sagabrown, who cancelled her holiday to Turkey to look after me, and an apology to her travel companion - I'll make it up to you both!

Planning well is an integral part of getting the most out of your trip. Be it picking the right backpack, the right vaccinations or the right country, the simple decisions are often the most important.

Tips for a great trip
Who are you going to travel with?
How long to go for
How should you travel?
Regional itineraries
How to save time
Weather
Planning a Gap Year? Some advice.
Seeking professional assistance
Cultural norms and sensitivities
Safety standards
Food and eating out
Police and authorities
Transportation

What is your trip going to cost?
How to save money for your trip
How to manage your money
How to spend less while travelling

How to pick a good backpack
What gear should you consider?
Travelling with electronics

Get the most out of your trip

Be sensible
Voluntourism
Travelling with kids
Reduce your impact

Getting a cheap airfare to Asia
Do I need reservations for my holiday?
Booking online, things you should know

Options for working in Southeast Asia
Teaching ESL in Asia
To Teach or Not to Teach
Travel writing: This is what it is all about
On being a travel writer